My work takes inspiration from myth, politics and the historic. 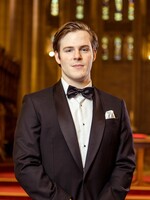 Alexander Voltz's work takes inspiration from myth, politics and the historic. His music has been performed and supported by the Melbourne Symphony Orchestra, Opera Queensland, Australian National Academy of Music, Flinders Quartet, Australian Youth Orchestra, Queensland Youth Orchestras, The University of Queensland and others. He has collaborated with musicians including Graham Abbott, Susan Ellis, Alex Raineri and Bradley Voltz. He is currently Emerging Composer-in-Residence with Camerata - Queensland's Chamber Orchestra.

23-year-old Voltz was a winner in Artology's 2015 Fanfare Competition (Sydney) and reached the semi-finals of the Bartok World Composition Competition (Budapest) in both 2018 and 2020. He was awarded The University of Queensland's Prize for Composition in 2019 and 2021. In 2018, he conducted several performances of his chamber symphony Sontsivka across North Queensland. Voltz attended the Australian Youth Orchestra's 2020 National Music Camp as a composition participant, and was engaged with the Melbourne Symphony Orchestra's Cybec 21st Century Composers' Program also in that year. His chamber opera, Edward and Richard: The True Story of the Princes in the Tower, premiered in July 2021 in Brisbane.

Voltz wrote pieces for Brisbane Boys' College while he was a student there, including his cohort's graduation song. He holds a Bachelor of Music (Hons I) from The University of Queensland, where he studied viola performance under Patricia Pollett and then composition with Robert Davidson. His Honours thesis investigated harmonic language within his music, and argued that contemporary art music composers should aspire towards authenticity, rather than originality or imitation. Voltz has also benefited from the mentorships of several other leading Australian composers, including Brenton Broadstock AM, Melody Eötvös, Nicole Murphy and Cathy Likhuta. Voltz also holds a Bachelor of Arts, majoring in Ancient History/History and Writing. He has penned articles for Limelight Magazine and 4MBS Classic FM.

As a violist, Voltz is an alumnus of the Queensland Youth Symphony and the University of Queensland Symphony Orchestra. He has performed under several renowned Australian conductors, including John Curro AM MBE and Richard Gill AO, and has undertaken international tours to Germany, China and the United States.

Voltz lives in Brisbane, Australia. He signs his work A. D. K. Voltz, and is currently the youngest composer represented by the Australian Music Centre.