I enjoy music that celebrates the body as well as the mind, that responds to how our primate brains operate. We're living in the most exciting musical period ever, and I'm thrilled. 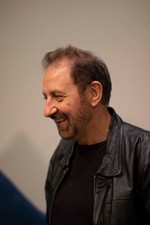 His quintet Topology has played at numerous festivals around the world since forming in 1997 - their performances range from supporting pop group Savage Garden to experimental theatre. Topology worked with Geoffrey Rush in the opening production of the Optus Playhouse and again in the 2000 Olympics Arts Festival, and have collaborated closely with a very wide range of artists, including Terry Riley, TaikOz, the Brodsky Quartet, Kate Miller-Heidke, Katie Noonan, William Barton, Abhinaya Theatre (India) and Dead Puppets Society. They have released 15 albums.

One of Davidson's areas of interest is in making music from the intonation of recorded speech. Well-known works in this area include Not Now, Not Ever! for choir with Julia Gillard's Misogyny speech, and Big Decisions narrating the events of the Whitlam Dismissal. An album of Prime Minister speeches, The Singing Politician, was released in 2016 with The Australian Voices and Topology. His 2017 work Stalin's Piano for pianist Sonya Lifschitz has been featured widely in festivals around the world, including at London's Barbican Centre where it received 4-star reviews.

Davidson's compositions are regularly performed, recorded, broadcast and televised around the world. in venues including New York's Lincoln Center, Sydney's Opera House and London's Barbican. All of Australia's professional orchestras and many leading soloists and ensembles have commissioned and performed his works. With Topology he has released 14 albums, and has directed numerous artistic collaborations with creators of many varied cultural and stylistic backgrounds, including The Saints, Geoffrey Rush, Terry Riley, The Brodsky Quartet, Katie Noonan, Kate Miller-Heidke, Christine Anu, TaikOz, William Barton and many more. He has scored three documentary films: Memory Tree (Juniper/ABC), Joyride (Fifty Fifty/ABC, 2018), and Strong female lead (Northern Pictures/SBS, 2021).

Dr Davidson is the head of composition at the University of Queensland and his research is in artificial intelligence and music, music theory, collaboration, music literacy and music education.