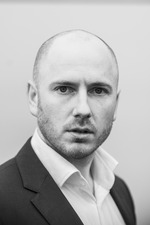 Melbourne composer, conductor and performer Dan Walker is one of Australia's most in-demand choral specialists. His compositional output includes commissions for Gondwana Voices, the Birralee Blokes, the Nittany Valley Children's Choir of Pennsylvania, Halcyon ensemble and the Sydney Children's Choir. He has been composer-in-residence for the Moorambilla Festival for the past six years and is often engaged to compose for ensembles both in Australia and abroad. His work, Out There, is a featured piece in the 2014 South Australian Primary Schools Choral Festival, where it will be performed by some 14 000 young singers in numerous venues across the state.

As a performer, Dan is a member of Sydney-based Cantillation, Pinchgut Opera and the Consort of Melbourne. He is a keenly sought-after conductor, often appearing as chorusmaster for the Sydney Symphony, and was an associate conductor of Gondwana Choirs from 2006 - 2014. He is now both musical director of the Melbourne group, Choristry, and the newly created 'Habeas Chorus', a choir for the Melbourne legal community.