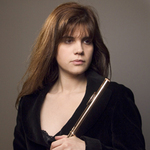 Sharon Bezaly has been called 'God’s gift to the flute' – hyperbole justified by her phenomenal technique, spectrum of colours and quicksilver intelligence. She leaves her audiences breathless with her apparently limitless ability. The flute came into its own in the 20th century, with composers responding to its multitude of characters: lyrical and brilliant, and as given to melancholy as airy happiness. Bezaly has selected a number of attractive new flute concertos guaranteed to dazzle.

Carl Vine’s Flute Concerto, Pipe Dreams, imagines what a flute would dream 'in a universe where everything is possible'. The result: a rhapsodic showcase for Sharon Bezaly’s golden flute and the ACO. To celebrate the 20th anniversary of Richard Tognetti’s leadership, the ACO is proud to present the world premiere of a new work for violin and strings by Peteris Vasks, a proponent, with Pärt and Gorecki, of the Baltic holy minimalist style.Tchaikovsky’s Serenade was one of the composer’s favourite works, a heartfelt homage to his beloved Mozart 'in imitation of his style'. Actually, the Serenade is pure Tchaikovsky: as tuneful, elegant and passionate as any of his ballets.