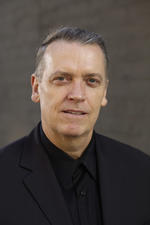 Carl Vine AO is one of Australia's best known and often performed composers, with an impressive orchestral catalogue featuring eight symphonies and thirteen concertos. His piano music is performed frequently around the world and recordings of his music on more than 60 CDs play regularly on Australian radio. He has an extensive range of chamber music alongside various work for film, television, dance and theatre. Although primarily a composer of modern art music, he has undertaken such diverse tasks as arranging the Australian National Anthem and writing music for the Closing Ceremony of the Olympic Games (Atlanta, 1996).

Born in Perth, he studied piano with Stephen Dornan and composition with John Exton at the University of Western Australia. Moving to Sydney in 1975, he worked as a freelance pianist and composer with a wide range of ensembles, theatre and dance companies over the following decades.

Amongst his most acclaimed scores are Piano Sonata (1990) and Poppy (1978) for the Sydney Dance Company and Choral Symphony (No.6, 1996) for the West Australian Symphony Orchestra. His first six symphonies are available on the ABC Classics double-CD set Carl Vine: The Complete Symphonies performed by the Sydney Symphony Orchestra. Much of his chamber music is available on three discs from Tall Poppies Records (TP013, TP120 and TP190).

From 2000 until 2019 Carl was Artistic Director of Musica Viva Australia, the world's largest chamber music entrepreneur. Within that role he was also Artistic Director of the Huntington Estate Music Festival from 2006, and of the Musica Viva Festival (Sydney) from 2008. Carl has been Senior Lecturer in Composition at the Sydney Conservatorium of Music since 2014. His recent compositions include Piano Sonata No 4, "The Enchanted Loom" (Symphony no 8) for the Melbourne Symphony Orchestra, "Implacable Gifts", a concerto for two pianos for the West Australian and Tasmanian Symphony Orchestras, and "Five Hallucinations" a trombone concerto for the Chicago and Sydney Symphony Orchestras. In 2014 Carl was appointed an Officer of The Order Of Australia (AO) in the Queen's Birthday Honours List. For more information visit carlvine.com.

- Article: Odd man out brings his many talents to town