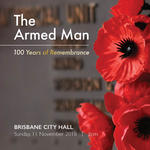 In Brisbane Symphony Orchestra's last season for 2018, we join with Sunshine Coast Oriana Choir to perform a concert of works which relate, in different ways, to man's experience of war, and in particular the First World War.

Karl Jenkins' work The Armed Man (a mass for peace) has become one of the most important compositions of recent times since it was commissioned by the Royal Armouries Museum for the millenium. The work draws on many sources, from the Catholic mass to the Hindu epic Mahabharata and includes a traditional Muslim call to prayer. Its title derives from an ancient French song (l'homme armé) and its seamless blending of ancient and modern with Jenkins' deeply felt originality, influenced by his reactions to the war in Kosovo, makes it a fitting work to commemorate the centenary of the ending of the First World War .

In that war, indeed, composer George Butterworth lost his life. Tragically he was killed in the Battle of the Somme at the age of just 31, leaving a body of work which includes the symphonic rhapsody entitled A Shropshire Lad, based, like the song cycle itself, on the poems of A.E. Housman.  The work, although not about war in itself, is steeped in the composer's love of his country and the underlying sadness of leaving it to fight and, perhaps - as was indeed the case - not come back.

Australia's Peter Sculthorpe loved his country as much as George Butterworth did his, and his entire output, including Small Towns, reflects this love.  This particular piece pays gentle homage to all small Australian towns, each with its memorial to the local men and boys who died in the First and Second World Wars, and features two trumpets playing The Last Post.  The work has become a classic evocation of what it means to be Australian.

Albinoni's Adagio for Strings and Organ is actually a work by Italian composer Remo Giazotto, published in 1953.  It was however based on fragments of an unpublished work by 18th century Venetian composer Tomasino Albinoni, which were discovered in the ruins of the Saxon State Library in Dresden after it was destroyed by Allied bombing in World War II.  It has become one of the most loved pieces of orchestral music, used in many films but particularly to great effect in the final scene of the Peter Weir film, Gallipoli.

November 11 2018 marks the 100th anniversary of the end of the war to end all wars.  Alas, this has not proven to be the case, but the works featured in our fourth and final concert for the year reflect both the tragedy of war and our sincere and abiding hope for future peace.

Further information for this event is available online at the event's website or by email to admin@brisbanesymphony.org.au