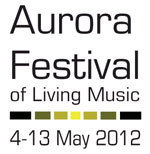 "This is a program reflecting on what seems to be a rather large body of work created over the past ten years. Some of these pieces have been performed at Aurora before, and others are brand new. I’ve interspersed movements from Andrew Ford’s Five Studies in Radiance to link the other works. Douglas Gibson’s work is receiving its Australian premiere here at Aurora – he was a finalist in the American Harp Society 2010 Composition Competition, and has created a beautiful evocative work inspired by the pearl divers of Broome.

Meghan Stevens’s work was premiered at a concert of new works presented at the Danks Street Depot in Sydney, and Andrián Pertout’s work grew out of a workshop held at Melbourne University. Birtwistle’s Crowd is a masterpiece study in sound, articulation and texture, utilizing a huge range of sounds from the harp. And Ross Edwards created his exquisite work as a wedding anniversary tribute to music lovers in Sydney. There’s a lot of personal connection in this program, a lot of the music has grown from talking about music and ideas, and creating opportunities for the presentation of new music. All qualities that are exemplified by the Aurora Festival. I hope you find lots to enjoy!"