Edwards's distinctive sound-world fuses shapes and patterns from nature with a variety of musical resources which reflect and celebrate Australia's cultural diversity. 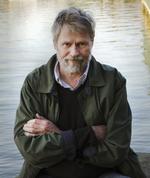 One of Australia's best-known and most performed composers, Ross Edwards has created a distinctive sound world which reflects his interest in deep ecology and his belief in the need to reconnect music with elemental forces, as well as restore its traditional association with ritual and dance. His music, universal in that it is concerned with age-old mysteries surrounding humanity, is at the same time connected to its roots in Australia, whose cultural diversity it celebrates, and from whose natural environment it draws inspiration, especially birdsong and the mysterious patterns and drones of insects. As a composer living and working on the Pacific Rim, he is conscious of the exciting potential of this vast region.

Ross Edwards's compositions include five symphonies, concertos, choral, chamber and vocal music, children's music, film scores, a chamber opera and music for dance. His Dawn Mantras greeted the dawning of the new millennium from the sails of the Sydney Opera House in a worldwide telecast. His compositions often require special lighting, movement and costume. A recipient of the Order of Australia and numerous other awards, he lives in Sydney and is married with two adult children.

Recent commissions include Sacred Kingfisher Psalms for The Song Company, Ars Nova Copenhagen and the Edinburgh Festival; a Piano Sonata for Bernadette Harvey commissioned by the Sydney Conservatorium; Full Moon Dances, a saxophone concerto for Amy Dickson, the Sydney Symphony and the Australian symphony orchestras; Five Senses, a song cycle for female voice and piano to poems of Judith Wright; The Laughing Moon for the New Sydney Wind Quintet; Zodiac, an orchestral ballet score commissioned for Stanton Welch by the Houston Ballet; String Quartet No. 3, Summer Dances, commissioned by Kim Williams for Musica Viva Australia; and Animisms, for the Australia Ensemble.

Frog and Star Cycle, a double concerto commissioned for saxophonist Amy Dickson, percussionist Colin Currie and the Sydney Symphony had its resoundingly successful premiere in the Sydney Opera House in July 2016. Bright Birds and Sorrows, a major work for Amy Dickson, saxophone, and the UK based Elias Quartet, will be premiered in April 2017 at the Musica Viva Festival in Sydney. He has recently completed Entwinings for the Australian Chamber Orchestra, to be premiered in October 2017.

Book: Beyond sacred and maninya : developments in the music of Ross Edwards between 1991-2001 / P.G. Cooney.

Book: The music of Ross Edwards : aspects of ritual / by Paul Stanhope.

Book: The piano music of Ross Edwards : a performer's approach / by Ross Hamilton.

Book: Towards an Australian style : on the relationship between the Australian landscape and natural environment and the music of Peter Sculthorpe and Ross Edwards / Jeanell Carrigan.

- Article: Risks in offering Ross Edwards to the young

- Review: The Song Company: Music and the Environment 23 April 1993

- Video: Ross Edwards on composition I: In conversation with...

- Video: Ross Edwards on Maninya I and text setting - In conversation with...

- Video: Ross Edwards on writing for voice and early works

- Video: Ross Edwards on being an Australian composer

- Video: Ross Edwards on Composition II - In Conversation With...