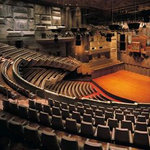 Let us take you from mountaintop to the world’s end.

There is nothing like music to transport you, as this extraordinary concert featuring star pianist Alexandra Dariescu demonstrates.

It’s the ultimate adventure: scaling a mountain, battling the elements and touching the void. Australian composer Gordon Hamilton found his spirit of adventure aboard the Aurora Australis, as the icebreaker voyaged to Antarctica. Integrating recordings of whales, birds and the awesome sounds of the ice into an original composition, Far South was composed in Antarctica and shimmers with the wonders of the Great Southern Land.

Richard Strauss’ inspiration came not from below but above. He toyed for years with the idea of a symphony inspired by a childhood hiking experience, but it wasn’t until the death of his friend and fellow composer Gustav Mahler, that the idea finally formed. The result was An Alpine Symphony, which premiered in 1915 to instant acclaim.

The title is something of a misnomer; it isn’t a symphony at all, but a varied and visionary tone poem, one that pulls on the full might of the symphony orchestra. It conjures the scent of pine, the cascade of the ravine, the electricity of an approaching storm. Led by English conductor Alexander Shelley, this is music as landscape, majestic and transportive.

Romanian pianist Alexandra Dariescu makes her MSO debut with Edvard Greig’s Piano Concerto in A Minor. A work that requires great flexibility in the relationship between soloist and orchestra, it will round out this glorious tribute to the natural environment, and the uncanny power of music to evoke it.

Gordon Hamilton’s Far South was composed in Antarctica on an Aurora Legacy Fellowship from the Australian Antarctic Division.