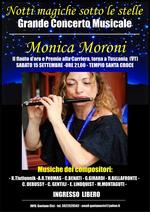 Gaetano Cici, officializes the next "MUSICAL CONCERT" by the international artist Monica Moroni, a golden flute and a career award in Tuscania in the splendid setting of the Tempio Santa Croce. The return of the International artist, after 4 years, is scheduled for Saturday 15 September at 9.00 pm.

THE MUSICAL PROGRAM IS THE FOLLOWING:

After the great successes of Farfa (RI), Tuscania, Viterbo, Rome (San Giovanni in Laterano basilicas -San Lorenzo Outside the Walls) and over the border in St. Petersburg in the Mikhailowsky Palace on the occasion of the 260th year since the birth of Mozart, in China at "Sias International University, Monica Moroni returns to scene in Tuscania in the Temple of Santa Croce, in the town of Tuscania, probably of medieval origin.

The building overlooks the wide Piazza Basile, where there are also the Palazzo Comunale and the Church of San Lorenzo. Outside the building is preceded by a beautiful garden on whose enclosing wall can be seen nine covers of Etruscan sarcophagi with outlined figures. The structure of the Temple looks very different from the original, both for the various alterations, both for the various functions to which it was used.

It is currently home to the Historical Archive and the Municipal Library. Today the façade has a simple portal with square pillars, perhaps once decorated with zoomorphic figures. Inside, with a single nave, there are round arches and single-lancet windows. The frescoes that once could be admired on the walls have unfortunately gone lost, except for some fragments due to the earthquake of 1971.

The great musical concert by the San Marino / Pesaro artist will start at 21:00.

The event has obtained the patronage of the Municipality of Tuscania.

Further information for this event is available online at the event's website or by email to gaetanocici@yahoo.it