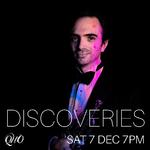 Discovery is finding something new: that new taste, new smell, new sound. David Law returns to the podium to conduct the Queensland Wind Orchestra in Discoveries, where we give the gift of discovery to our audience with an unprecedented SIX Australian premieres, including THREE world premieres.

By joining us at Discoveries, you’ll be among the first in Australia to hear these amazing new works in a concert setting. To help with your Christmas shopping, you’ll also be able to go into a raffle to win a Nintendo Switch, thanks to the Vita Foundation!

Tickets on sale now, including Inspire: giving children aged eight and older the opportunity to sit in with the wind orchestra during sound check next to an instrumentalist of their choice (pending seat availability) and receive a ticket to the concert.

Further information for this event is available online at the event's website or by phone on (07) 3257 4089 or by email to oldmuseum@qyo.org.au