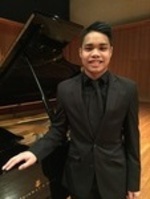 On Sunday 29th October at 4pm at OLGC Catholic Church Forestville, Wyvern Music Forestville presents its final concert for 2017, continuing its “Rising Young Pianists” series by showcasing two young talents of the Australian keyboard scene, Nicholas Kennedy and Martin Lijauco. The concert will feature some of the greatest composers of keyboard music from Bach, Mozart, Brahms and Chopin to 20th Century Russia with Shostakovich and Kapustin’s classical and jazz fusion, and 21st Century Australia with celebrated composer Carl Vine (AO).

Born in Sydney in 1996, Nicholas Kennedy holds the Chapple-Bremner Scholarship at the Sydney Conservatorium of Music, where he is currently completing a Bachelor of Music (Performance) in the class of Clemens Leske. In 2017, Nicholas won the Mary Greville and Bert Coughtrey Scholarship for overseas study, with which he hopes to pursue postgraduate studies in the UK or USA.

23-year-old Martin Lijauco is completing a Bachelor of Music (Performance) at the Sydney Conservatorium of Music with Clemens Leske, after which he plans to study overseas with a focus on accompaniment. Although his musical training has largely revolved around Classical repertoire, Martin also plays regular contemporary gigs which include a residency at The Grace Hotel in the Sydney CBD.

Further information for this event is available online at the event's website or by phone on (02) 9416 5234 or by email to wyvern@fmca.org.au