'Before studying Lumsdaine's music, I didn't think much about how Sydney sounded. I now think about it all the time.'

Michael Hooper writes about David Lumsdaine's soundscapes and reflects on the UK-based composer's profound influence on how he now experiences his own immediate sound environment of a Sydney suburb. This article celebrates Lumsdaine's 90th birthday on 31 October 2021. Please read also Hooper's earlier Resonate articles: 'David Lumsdaine 's energetic gravity' (27 October 2011) and 'Getting to know David Lumsdaine's music' (20 September 2012), as well as his 2008 interview with Peter Wiegold. A celebratory concert by Gemini - an ensemble associated with this music since 1974 - will take place at the Royal Academy of Music, London, on 7 November.

As I type there's a ruckus outside the house. I can hear the alarm calls from Rainbow Lorikeets, which are also flying around in groups. The Noisy Miners are calling-in their friends, partly to deal with the threat, partly to deal with the other birds that have gathered in their territory. The Pied Currawongs are also calling, and snapping their beaks as they swoop. There are some two dozen birds involved.

Different versions of this happen several times a day: sometimes there's no apparent reason, but mostly it's caused by a raptor flying past, heading up the river toward the Lane Cove National Park. Sea Eagles, Goshawks, a Nankeen Kestrel, or sometimes a Black-Shouldered Kite. If there's a raptor, then usually the Sulphur-crested Cockatoos are involved in the alarm, too, in place of the Currawongs that aren't so concerned by the raptors. The snapping I can hear suggests a different threat: the newly arrived Channel-Billed Cuckoos. They are back from their migration, and now circling around the suburbs in pairs, looking for currawong nests to lay their eggs. This is why the currawongs in particular are not happy. After ten minutes of alarm calls, snapping, and swooping, the cuckoos leave the tree, though they will be around all summer, and they, too, will be calling to each other as they fly. They are a key sound of Sydney summer, arriving in September, and leaving in March. 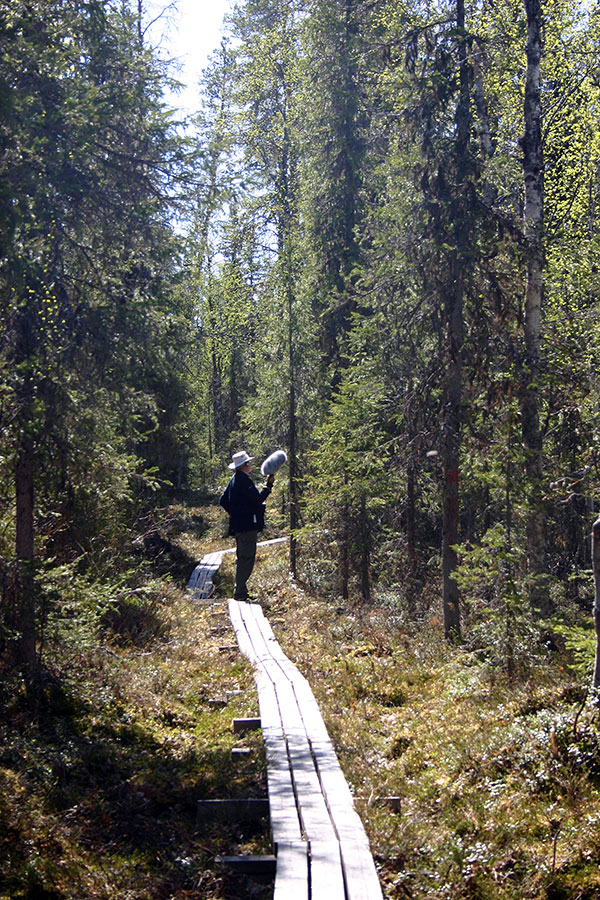 David Lumsdaine recording in a Swedish
national park in 2007.

I remember having a conversation about the Channel-Billed Cuckoos with composer David Lumsdaine. He expressed some surprise when I spoke about them as one of Sydney's common birds. When he grew up in Sydney in the 1930s, they would have been a very rare visitor. Ornithologists, such as K. A. Wood, writing in Australian Field Ornithology, considered it a rare non-breeding migrant until about the 1980s, and it was in the 1990s that breeding records markedly increased in Sydney. And so, like many other species (the Figbirds are also active at the moment, and also not birds one would have often heard in early 20th-century Sydney), the city's aural soundscape is changing due to climate change, new suburbs, and different parks and gardens.

I live in an established Sydney suburb, where not much changes quickly, and where there are plenty of gardens for birds. Over the past year I have observed 37 species on or over the property. Looking down that list, almost none of the birds have much of a song. My stay-at-home soundscape is all calls. The distinction between calls and songs is important, since calls are fixed, predictable, and known. Songs, on the other hand, can be inventive, surprising, learned, and adapted to the situation. When I hear a King Parrot flying by, I know it's a King Parrot because of its call, but there's not much that a musician can do with that kind of sound since it doesn't vary. Some birds on my list are a little more interesting, such as the White-browed Scrubwrens that I once saw in the backyard foraging under some shrubs. And then there are other species - which I don't have at home - that we could consider more 'musical,' such as a Golden Whistler that I can, if I'm lucky, still hear in my Local Government Area.

One silver lining of the restrictions over the past year has been the sight of so many people finding more to do near home, and those activities have created newly meaningful geographies: everyone in Sydney now knows their boundaries of their LGA and how far 5km is from home. Hopefully many also have a better sense of how their part of Sydney sounds, without the aircraft noise that usually dominates the city's sonic space.

Before studying David Lumsdaine's music, I didn't think much about how Sydney sounded. I now think about it all the time. I'm also now fortunate to have copies of some of Lumsdaine's bird-recordings (the full collection is held in the British Library), which I also sometimes use for my teaching. Most of Lumsdaine's recordings were made in either England (where he now lives) or Australia, and some of the Australian recordings are from in and around Sydney. The gullies, creeks, forests of Ku-ring-gai, for example, are well represented.

Some of his composed music refers to such places, including Salvation Creek with Eagle. Salvation Creek is on the popular walking track in Sydney's Ku-ring-gai Chase National Park, where it is entirely possible to see an eagle. Although eagles are not especially interesting from the point of view their vocalisations, they do sometimes make a significant impact on the vocalisation of other birds as they move through a place. His programme note offers the following image:

But also a caution: 'The music is not about these things; they are where the music came from.' He then offers a description of the music - its polyphony, its quietness, its quotation of Charles Ives, which suggests that the music is about music. Nevertheless, the composition does suggest a way of understanding a place in terms of its birdlife, and there is no reason we can't use the music as a prompt to think through our own experience of places and their sounds.

There are also enough relationships between music and birds in his other pieces of music to make that connection at least plausible to entertain. The most obvious example is Mandala 4 (1983), in which: 'Every musical idea derives from the birdsongs, in particular those of Spirey Creek [in the Warrumbungle National Park] as I heard them one dawn in the spring of 1984'. Even Mandala 2, which is 'about' rhythmical canons, nevertheless has a program note that raises the question of something more: 'What they [i.e. the canons] create is something like a rondo of rondos: ritornelli of very basic gestures (bird calls, animal cries, botanical shapes?) which transform and twine around one another'.

Of Lumsdaine's various soundscape recordings, only one is focussed on the sound of people moving about a city, and that soundscape is Big Meeting. It was recorded in Durham in 1971, and it documents the sounds of the city's Miners' Gala (the Big Meeting). The way Lumsdaine explains the piece in his programme note begins with the place itself: the plateaus and gorges of county Durham, its proximity to the coast, and the city's position on its river. Then comes the way that people have shaped the space, especially through its history of mining and manufacturing. (Lumsdaine was there for one of the city's other purposes, as an academic centre, working at the university.)

I just referred to Big Meeting as a soundscape, though it is subtitled 'an electronic fantasy for tape.' Perhaps documentaries always involve something of the non-documentary, and the subtitle neatly avoids the 'soundscape versus acousmatic composer' debates. The fantasy is therefore Lumsdaine's - he is its composer - though it nevertheless sounds historical, with recognisably human sounds, catches of voices, and recurring music played by bands. The Big Meeting that was recorded (to become Big Meeting) was exceptional, in the sense that the sounds that were recorded were not of a typical day in Durham, and it is also exceptional in being made from recordings of Durham just before the decline in its mining industry.

The exceptional and the every day. I wonder whether Lumsdaine's soundscapes that do not include human sounds - and which are mostly about birds, with some frogs and insects (and other environmental sounds) - involve a similar duality? Of course, there are times of the year when birds are more vocal, and times when the frogs are silent. Compared to the notated music, with his recorded soundscapes there is more of the everyday - since he recorded a snapshot of the calling and singing that happens across months - though not most people's every day. Four of his soundscape recordings were commissioned by the ABC ('composed,' as he considers them, in 1990), and one by 2MBS (1991), and even if they are of the sounds that could be heard on many days, they all sound extraordinary. They make the sounds I heard earlier, outside my window, very dull indeed.

Another way of thinking about the 'exceptional' and 'every day' duality is as another form of music that is about music (what it's doing musically, how it's made, what other music it might be about, etc.) and music that is meaningful in other terms (in terms of relationships between people, or ideas, or places, or other non-musical sounds). So, just as the sound of the birds outside my window is about territoriality, the presence of the Channel-Billed Cuckoos in that argument is also an index of climate change, which is presumably the principle reason that they are here to evict Pied Currawongs from their nests.

The reason that I find Lumsdaine's music uplifting is that it calls for us to pay closer attention: to the music and to the sounds around us, or to how we could hear familiar places in new ways. The music has high standards for us as listeners, which also means that it generously creates possibilities for new ways of hearing. In other words, the music offers the hope that we will escape a life marked by the sound of air-conditioners and aeroplanes to find a better soundscape.

Michael Hooper is Associate Professor in Music at the University of New South Wales.