Earth Dances: the thrill of the primal in music

Drones are everwhere we look in music, from minimalist works to heavy metal, to Peter Sculthorpe's orchestral pieces, to the mysterious music made by telegraph wires in the Australian Outback. Drones are also one of the many earthy and 'primitive' elements of music that composer Andrew Ford ponders in his new book Earth Dances - Music in search of the primitive. Australian composers discussed in the book include Liza Lim, Peter Sculthorpe, Alan Lamb, Robert Davidson, Julian Day and Luke Jaaniste. The following extract from Earth Dances is published with kind permission from the book's publisher Black Inc. 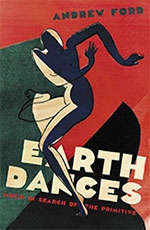 The idea of music consisting of little more than drones caught on in the early 1960s in San Francisco, when composers including La Monte Young and Pauline Oliveros - minimalists avant la lettre - began listening to sustained tones, the musical interest coming from subtle changes of pitch or timbre, the way in which notes decayed and were renewed. It is no coincidence that Stockhausen composed Stimmung (1968) following a sojourn in the Bay Area - and during the 'summer of love', what is more. From a harmonic point of view, Stimmung is static. For anywhere between an hour and ninety minutes, six closely miked singers vocalise very quietly on a single chord based on the overtones of a low B flat, these notes in turn forming the fundamentals for harmonic singing. The B flat drone, then, is the source of every pitch in the piece; even when not being sung by the bass voice, it stays in the memory of the listener.

Many of the early pieces by Terry Riley, Steve Reich and Philip Glass also had their origins in this sort of thinking. Glass's Music with Changing Parts (1970) is constructed around long-sustained drones from wind instruments and voices; Reich's pioneering tape-loop pieces It's Gonna Rain (1965) and Come Out (1966) both end up as drones. Each of Reich's phrases commences from fragments of recorded speech - in both cases it's a rather emotional speaker - before the looped voice, running on two tape machines, begins slowly to get out of phase with itself. As this happens, the clarity of the voice is slowly lost. In Come Out, the phasing effect is doubled, then redoubled, the final result a buzzing continuum of tone.

Drone music became (somewhat) more commercial with Brian Eno. Long interested in a range of music beyond his work with Roxy Music, Eno was one of the first composers to experiment seriously with music as ambience. It is very easy to dismiss this music as 'classical muzak', because in a way that's what it is. Eno's ambient pieces, like Erik Satie's 'Furniture Music', succeed only if one is able to ignore them. But unlike Satie, Eno was also keen that people should be able to listen as and when they wanted. Eno's ideal was music that would run on, allowing people to tune in and out at will. The drone, then, was a good starting point, and in pieces such as 'The Heavenly Music Corporation' from No Pussyfooting, Eno's 1973 album with Robert Fripp, the drone, with attendant overtones, is all.

More recent manifestations of drone music have been considerably less ambient. 'Drone metal' - sometimes called 'drone doom' - really began at the start of the 1990s in Seattle, when guitarist Dylan Carlson formed his band, Earth, purveyors, at least initially, of loud, slow, repetitive grungy distortion, based on a single continuous and very low pitch. Their first (live) album, Extra-Capsular Extraction (1991), featured the voice of Kurt Cobain on one track, but the basic Earth sound was instrumental, consisting of guitar, bass and drums. The tracks were long - the first studio album, Earth 2, runs for seventy-five minutes and contains just three tracks - and the mood dark. Later albums included Phase 3: Thrones and Dominions (1995) and Pentastar: In the Style of Demons (1996), titles suggesting that it was the witches-and-wizards end of metal from which this music had emerged, and the Dungeons and Dragons end of the market at which it was aimed.

Other Seattle drone doom bands included Goatsnake and Burning Witch, one member from each forming the highly influential duo Sunn O))), who always performed dressed in black monks' robes. To be a fan of drone doom, then, you had to buy into the mythology to some extent (of course that's also true of Wagner), but there was important work going on here, across a range of musical genres. Earth's later albums increasingly took them down some unexpected paths into country music and English folk song; in 2014, Sunn O))) made a studio album, Soused, with Scott Walker; other favoured collaborators were the Japanese noise artist Merzbow and the Australian Oren Ambarchi.

One concert-hall composer who used drones throughout his career was the Australian Peter Sculthorpe (1929-2014), and the end result of this in his work was particularly interesting. Strictly speaking, Sculthorpe's drones were pedal points, the main difference between the two being their length. In harmonic music, a pedal point is a bass note that continues to sound even as the harmony above it shifts. The result is generally a dissonance - the old bass against the new harmony - which is then resolved. It is a bit like a suspension, except that with a suspension the sustained tone is usually higher than the moving harmony, and the note that hangs over resolves to the new chord. In contrast, pedal points hold their own, pulling the dissonant harmony back to them, which is why they more closely resemble drones. In Sculthorpe's music, the pedals and the harmonic tension can carry over sometimes for minutes on end.

There is nothing especially noteworthy about pedal points: they are everywhere in music. Mahler used them, Sibelius made extensive use of them, and, as already observed, they are beloved by heavy metal bands. But the interesting thing about Sculthorpe's pedals is what they later made possible. Sculthorpe's orchestral pieces Mangrove(1979), Earth Cry (1986) and Kakadu (1988) were already among his best-known works when, at the end of the twentieth century, he began to reconsider the scores, in each case adding a didjeridu to the instrumentation.

The Aboriginal didjeridu is a drone instrument that builds its music from rhythm and from the often virtuosic use of overtones. Sculthorpe's didjeridu player of choice was William Barton, an Indigenous man from Mount Isa, in Queensland. But the composer didn't write parts for Barton; he simply allowed him to play along with the pieces. The extraordinary thing about the collaboration was not just that Barton seemed instinctively to know what was needed, but also that these works accepted his contributions so readily. The long pedal points in the scores accommodated Barton and his didjeridu almost as though the works had, hitherto, been incomplete and were only now properly finished.

Sculthorpe's music has frequently been spoken of in terms of landscape, and in discussing his work in later years, Sculthorpe himself came to adopt the imagery of the wide, flat outback reflected in the often slow pace of his music, the narrow range of his melodic lines and, above all, the slow rate of harmonic change associated with these pedal points. The Western Australian composer Alan Lamb went a stage further, stepping into the outback itself and even allowing it to make its own music. Lamb takes recording equipment on his trips in order to capture the music of the wind in telegraph wires. In 2000 he described the experience of making these recordings:

'The landscape that I think of is where I did most of my early music, down at the Great Southern region of Western Australia, bordering on the outback. It's quite high and flat, the sort of place where you can see weather coming twenty-four hours in advance, and see it disappearing over the other horizon twenty-four hours later.... It undulates, it reminds me of the ocean.... It's very wild, remote and huge, and you can feel it. It's much more than what goes through your eyes and ears. I find it very mystical, in a way.'

The music of the wires - Lamb calls it 'singing' - consists, usually, of a constant drone above and around which long, slow changes of overtones build and dissipate. But there are also sudden noises that sound like cymbal crashes. Lamb has a day job as a general practitioner in Perth; he is a man of science, but the sound of the wires would be enough to make anyone feel mystical.

'There's no doubt at all that the telegraph wires and the music I've recorded from them are responding in some way to the elements of the landscape,' Lamb explained. 'There are two levels of looking at this. One is that the shape of the landscape itself, the directions of the winds, the climate have an obvious physical effect on the winds that create the music in the wires. But there is something else, too, about the importance of landscape, and I think it comes back to this mysterious extra quality. I've been trying for years to work this one out. It's almost as if the wires have become imbued by the spirit of the place. There are times when I've heard the wires singing and there's really been no reason for it - no obvious reason. You can feel that the atmosphere is vibrating, and yet there may be no wind at all. I've heard the most extraordinary sound under these conditions, so there is some kind of peculiar interaction going on at a level that I've never truly worked out.'

Drones in the music of Sculthorpe and Lamb have come to represent the large expanses of the Australian Outback as surely as they stood for nature in the music of European Romantics, shepherds - especially shepherds at the Nativity - for baroque composers, and the crack of doom for drone metal bands. In each case, it is something primitive, something fundamental that we feel through our feet - a continuum capable of giving rise to elaborate melodic lines and of supporting them, but also capable of just being still and drawing us in.