How working with composers changed the Flinders Quartet

Cellist Zoe Knighton writes about the Melbourne-based Flinders Quartet's Composer Development Program, currently accepting applications for 2018. Up to six works will be workshopped by the quartet and the composition mentor Stuart Greenbaum, and the program will culminate in a produced recording to be broadcast by 3MBS Fine Music Melbourne, and a public, live-streamed performance. The program is open to composers of all ages, with a special place given to a composer below the age of 30, supported by Scarlet's Fund - this participant will also be eligible for a one-week residency at All That We Are artists' retreat in Tasmania, with return airfare provided. Submissions for the program close at 5pm on 1 June 2018 (AEST), and will be reviewed by Flinders Quartet and a panel of industry experts. Successful composers will be announced on 15 June. The workshops, public concert and recording sessions will be held in Melbourne in August 2018. For more information and submission details, please visit the Flinders Quartet website.

We started receiving scores from composers almost the moment we started playing together in 2000. One of our first concerts was performing works by Stuart Greenbaum and Katy Abbott and it set us on a path of relishing every opportunity to work with living composers. Not only was it exciting but it refreshed our thinking on the way we should approach Beethoven, Haydn, Schubert and the other icons of the string quartet canon.

Pretty soon we had an uncontrollable pile of scores, and the job of sifting through them became more and more overwhelming. After a few years of sighing about the potential treasures we were missing, our composer development program was born. 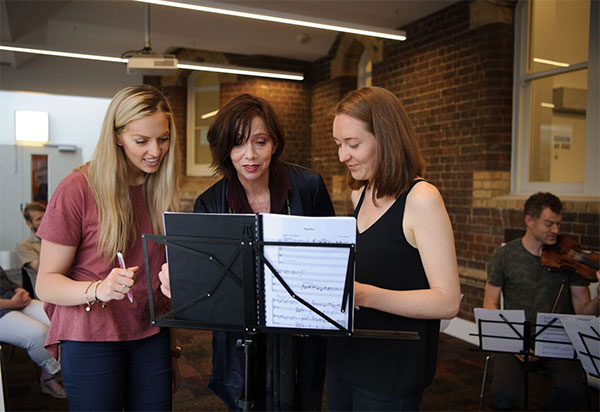 The quartet decided to wipe the slate clean and start fresh with a call out for submissions. Applications were, and still are, completely anonymous. So much so that we selected two compositions from the same composer in 2017. Also in 2017, after revealing the composers' identities, we found a friend and colleague had submitted a work that was one of the best scores we had ever seen. Incidentally, it is also one of the hardest.

In the inaugural year of the program, we set ourselves the challenge of selecting and workshopping eight compositions of about eight minutes' duration each, because that seemed like a good length for a concert program. The idea was that we would rehearse the pieces, work with the composers and composition mentors, and then perform and record them. We wanted the experience to give the composers the best chance to hear how a group puts together a piece of music. It goes without saying that we totally underestimated how much brain power it takes to premiere eight new works in the same concert. (With some of them being exceptionally difficult!) However, all of this resulted in an important shift in the psyche of the quartet: what began as a project that we knew we should be doing and would benefit, not only composers, but the whole musical ecosystem, became one of our favourite concerts of the year.

That first year of the program clarified for us that our mission was two-fold: discover composers not yet known to the wider public and perform and record their works; and to identify composers that we could see working sympathetically with the quartet's voice in order to nurture their careers through performances and further commissions.

In the second year of the program, in 2017, we intentionally reduced the number of selected works to six. We were increasingly mindful of taking on fewer scores and playing them well, and we also added on days of rehearsal before the initial meeting with composers. Fewer works and more rehearsal and workshop time to dedicate to each work certainly helped our stress levels on concert day (in 2016 and 2017, the public concert was live-streamed and recorded).

Now we are in 2018 and looking forward to our third annual composer development program, to be held this August. We have added on even more days of rehearsal and separated the recording and live performance aspects of the program to ensure the composers have a recording that will best represent their work. Successful submissions will be performed and live-streamed on 11 August at 6pm.

John Rotar has since been commissioned to arrange works by Guastavino and Mendelssohn for the quartet. His piece, V Večernih, originally submitted in 2016, was also programmed in Flinders Quartet's 2018 subscription season and performed around the country. 2017 participant Matthew Laing will have his first major work for string quartet commissioned and performed in our subscription season in 2019, and the quartet is looking at programming other previously submitted works in various programs.

While we hoped this composer development program would result in long-lasting relationships between the composers and the quartet, what has eventuated has exceeded our expectations. It seems that once a composer enters the Flinders Quartet fold, they become part of shaping our musical direction. The composers we play can help us navigate our route and can sometimes take us to unexpected places. But then again, we have always found that the journey is just as important as the destination.