Music for the Christina Conrad biopic

'I'm always drawn to sounds that are simultaneously beautiful yet dangerous and dark, and Conrad's story echoed these nuances', writes film composer Me-Lee Hay about her debut album soundtrack release for the biopic Heretic. The feature-length art film about the life and work of the New Zealand artist Christina Conrad screened to a full house in Sydney's Ritz Cinema in March 2021, followed by a screening in Melbourne at the Lido Cinema, Hawthorne, on 26 May. The album is now available from Bandcamp (in digital format, and a CD including a bonus track) as well as via regular streaming outlets. See also: more 'Insight' articles by the AMC's represented artists.

As a composer for other mediums, including for screen, theatre and dance, my inspiration comes from interpreting what synchronicity can come about from the visual and other audio elements, such as dialogue, presented to me. When I was introduced to New Zealand artist Christina Conrad's film, Heretic, I knew that there was so much scope in the audio landscape to accentuate her cathartic life story through score. Half spoken word poetry, half candid interview, interspersed with performance art and images of her sculptures and paintings, the feature film is a biopic on Conrad's journey - an artist, a woman, a mother, a wife, a lover, an abandoned child.

An artist of many forms - painter, poet, sculptor and film-maker - Conrad struggles with convention in the artistic as well a lived world, and reminds us of our own personal journeys and hidden strengths. As an artist myself, I related to her creative struggles, and perhaps that is why her story resonated with me and I was able to write the required nearly 70 minutes of music for this film. I'm always drawn to sounds that are simultaneously beautiful, yet dangerous and dark, and Conrad's story echoed these nuances. 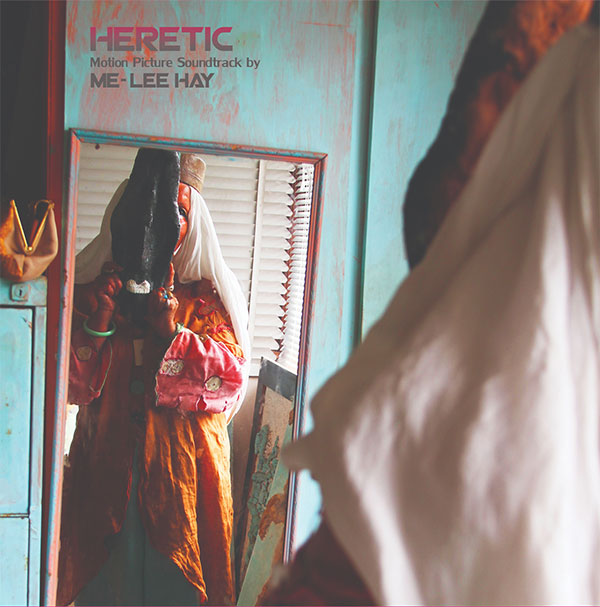 From the beginning I knew I wanted this score to feature the cello. Conrad knew I played the cello and, as a big fan of Jacqueline Du Pre, was drawn to this fact. At the time of meeting her I was even learning to play Elgar's Cello Concerto, made famous by Du Pre, so we had a lot in common already.

The cello is my second instrument - I learned the piano up to AMusA when a teenager, which gave me the basics in composition. However, my first instinct, after high school, wasn't to write for the art music scene but rather join the rock and roll scene of pubs and clubs and festivals in and around Sydney. I was inspired by the likes of pianist and singer songwriter Tori Amos, and so I formed a band that had bass, drums, violin and myself on piano and vocals, plus electronic pre-recorded beats and atmos. The pre-recorded beats were not seen much back then, as compared to now, and, combined with the fact that I was an Asian front singer/pianist with dreadlocks, performing music that was a bit left of centre, I think I knew it was going to be a struggle to make a real living from the independent live scene travelling up and down the East Coast. I released 2 EPs and an album, and managed to play a couple of times in London, even, but hung up my live band composing and performing work and refocussed to composing for film and TV in 2011.

I decided to do this by going to AFTRS to complete a Graduate Certificate in Screen Music. A tonne of short films later, I landed one of my first real commercial jobs for SBS One's travel cooking series with Luke Nguyen and have since done three seasons for it. I'm not always limited to the small screen: I went on to work for Museums Victoria Scienceworks Planetarium - a 360 dome cinema with 7.1 surround immersive sound. I wrote music for two of their documentaries, narrated by Sigrid Thornton and Geoffrey Rush, respectively, and the second documentary's budget allowed for recording a live orchestra for strings and brass which remains one of the biggest thrills of my creative working life.

As I continued to build my portfolio as a screen composer, I wanted to stay connected to playing an instrument and I chose to do that by learning the cello into my adult life. I'm the sort of person that likes tangible goals, and the AMEB system, ingrained in me by my piano studies, also suited my approach to learning the cello. I loved that a single note on a cello can be played so differently compared to a single note on a piano. Bow pressure, speed, its location in relation to the bridge and fingerboard, amount of vibrato - these were intricacies that one doesn't learn on the piano. I also really valued the repertoire and composition analysis that came with the syllabus to help inform my current compositional projects. During COVID-19 I attained CMus on cello and continue now to work on AMusA repertoire in the spirit of life-long learning.

As my roots in composition were playing live in the band scene, after many years as being purely a screen composer hidden away in a dark room in front of screens, I found that I missed the risk and thrill of live music. I found a new way of merging my two worlds when commissioned by the Joan Sutherland Performing Arts Centre in Penrith to compose and to perform live cello for a two-hander theatre show Yellow Yellow Sometimes Blue, directed by Nick Atkins. I found that the medium of live theatre combined the thrill (and the risk!) of performing live with the skill of composing in response to dramaturgical emotions. From there, I have ended up composing work for the Sydney Theatre Company's White Pearl, running in Brisbane, Sydney and Canberra this year. I've also been honoured to have been commissioned to write music for the Sydney Dance Company's PPY (Pre-Professional Year) program..

With my wonderful cello teacher Rachel Valentine, I really explored how the cello could be expressive in so many ways - from soulful, depth of dread and sorrow to jubilant celebration. This was the foundation from which I started writing for the soundtrack for Heretic. Essentially I wrote for a string trio, sometimes quartet. Sometimes double cello, sometimes double viola.

As the project progressed, COVID lockdown occurred and it threw the recording schedule into disarray. In the end, because of the COVID restrictions, I decided to multi-track all the instruments in my personal studio. I'd always intended to multitrack to create a full string section sound, but now I was doing it with single players rather than in a chamber style as initially intended. I played around with changing microphones (borrowing Neumann 180s, U87s, AKG 414, Rodes K2 and NT2), changing mic positions in relation to F holes, and even changing pre-amps. The violinist and viola player, Bonita Cynthia Silva was super patient with me moving mics around her all the time for multiple takes - up to eight times for one same phrase to emulate eight 1st violins, and then another eight times for 2nd violin parts, and then six times for viola parts. I ended up multi-tracking a smaller handful of tracks myself for cello section parts.

The multi-tracking presented many challenges to achieving a cohesive mix that a normal live ensemble would achieve seamlessly. Hence much credit and gratitude is given to the Emmy award nominee score mixer, Evan McHugh.

Some call Christina Conrad New Zealand's greatest living artist. She lived as a recluse for many years, with minimal electricity or running water, and 'kept her paintings in cupboards instead of food'. The quintessential artist, prolific and cathartic, and struggling to find that balance of motherhood, putting food on the table and producing work - so common a story in this modern world.

Conrad gave me a lot space to work creatively around her film, and I am honoured to be a part of this shared artistic journey with her. Even though I have had the honour of writing music for other feature films that have been released in commercial cinemas (A Second Chance: Rivals!) and also being additional composer for one of Max Richter's more obscure independent films (Penelopa), I am excited that this will be my first commercial soundtrack release.

> Me-Lee Hay - AMC profile. Heretic album details on the AMC website. Heretic is available from Bandcamp (digital/CD with a bonus track), via Spotify and Apple Music.

A Breath of Fresh Air

A delightful engaging read that intrigues me to know more about the film and its music.  This essay presents such an authentic journey as this composer speaks of her music life, music and life.

Me-Lee Hay simply and candidly describes how her inner impulses and the impact of systemic stereotypes in the external world we inhabit in Australia combine to give her music and her career their character.

The details of her inspiration in writing this screen music, and perspiration in realising the music in the material world, are given in an straight-forward account of the knowing of one's inner self, and the amount of time required in practical research and patient attention to detail needed to manifest the finished product. It is a breath of fresh air in the current mode of spin self-promotion as innate genius.

I am looking forward to seeing this film and hearing more of Me-Lee Hay's music.