[Article edited and out-of-date links removed in May 2018. For the Sydney Symphony Orchestra's performances of Abbott's Introduced Species, see the following calendar records: 31 May 2018 and school concerts 29 May - 1 June.]

Katy Abbott writes about her new work Introduced Species and its inclusion, in March 2014, in the Melbourne Symphony Orchestra's 'Up Close and Musical' education series. Two new CDs of Abbott's music have also been just released: hard copies of The Domestic Sublime: the vocal music of Katy Abbott and the EP-length choral disc Famous (with MLC Sydney) are available from Katy Abbott's website, along with digital release purchase links.

I'm as good as paralysed by the information out there on climate change. I'm a passionate believer, but, rather than help to make it easier to change my ways, I find all the statistics, the science, the petitions, the should and should-nots (go meat-free, nude-food, think about food miles, grow your own…) make my brain swirl and my eyes glaze over. I stand looking at my kids' lunchboxes knowing that if I don't wrap the sandwiches in plastic wrap they won't eat, and if I do, I am being a terrible role model, not standing for what I believe in. What's a girl to do?

We have solar power, run tank water through the house, hate gardening yet are growing our own herbs, and every time I go shopping I forget the recycling bags and have to use plastic ones. I remember clearly when my kids were babies, nearly 11 years ago, how I used disposables and felt guilty every time I changed the twins' nappies (no less than 16 nappies a day!). Actually, I think I'm doing pretty well - but the solutions with plastics remain elusive to me.

And what's this got to do with music? In early March this year, my new orchestral work Introduced Species was premiered. The work's programmatic element includes a musical description of the North Pacific Garbage Patch, and this is where my worlds collide.

Introduced Species was composed for the Melbourne Symphony Orchestra Education's 'Up Close and Musical' presentations 2014. The work was commissioned by the MSO in conjunction with the Albert H. Maggs Award, which I was fortunate to receive in 2011.

'Up Close and Musical' has been running for a few years now and is aimed at VCE/HSC level and designed to intersect and feed into the Australian Composition Post-1910 Victorian VCE subject. However, students from years 7 - 12 were amongst the audience. The presentation included an analysis by the composer, with orchestral players demonstrating main themes, textures and curiosities from the piece. There were also a few stories about the compositional process, followed by a full performance of the new work. The session ended with a Q & A.

The presentations were held at 'satellite' schools in Melbourne's north (PEGS), east (Blackburn High School) and south (Brighton Grammar School), which aimed to include schools from those areas to the activities of the MSO. It was wonderful to meet some of the regional VCE students who had travelled to attend.

Introduced Species is a 19-20-minute work for orchestra in three continuous movements. The work is very programmatic in nature as per my current penchant for storytelling. 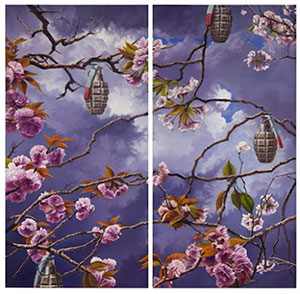 The launching point for Introduced Species came from a work of art by Australian artist Matthew Quick. In his series Introduced Species each painting depicts a gorgeous natural background, such as a desert, an ocean or perhaps a tree. Superimposed or introduced to this is a surreal or out-of-place object. In the case of Low Hanging Fruit (2011), a beautiful cherry blossom tree has scarily realistic cluster bombs hanging like ripe fruit from the branches. An ocean in Catch 22 (2011) includes Kikkoman soy sauce 'sushi' fish swimming in a school. Up close, they are beautiful works, but they all have a programmatic, often political, basis. (To see all paintings, go to Matthew Quick's 'Introduced Species' gallery.)

My work uses the story behind Intrepid Travellers (2010) from this series. In 1992, nearly 29,000 bath toys fell from the cargo ship Ever Laurel on its way from Hong Kong to the USA. Many of the bath toys were yellow rubber ducks. The ducks have since scattered and washed up on beaches all over the globe and even been sold on eBay (for quite a sum!). Scientists and oceanographers have studied their travels and been able to better understand ocean currents, wind patterns and ocean debris. Journalists, writers, artists have also shown much interest.

I watched Matthew Quick's Intrepid Travellers develop from pencil on canvas to the final piece when I was an artist at the Abbotsford Convent where Matthew works. At this time, I also began to research the North Pacific Garbage Patch (more about that below) in which some of the ducks are still circling. A story began to emerge.

As I wondered about Matthew's oversized rubber ducks bobbing happily on the ocean, I began to give them characters and ask questions: What if the rubber ducks, destined for life in a domestic bath tub, did not fall accidentally as cargo from the ship? What if they escaped instead?

In its final form, the near 20-minute work takes the following form:

Movement 1: 'Awakening' - the ducks are lulled to sleep on the ship. They awaken, newly sentient beings, and, in Toy Story fashion, begin a mass escape which results in the ducks launching themselves from the deck of the ship into the air. A siren (Doppler effect) is heard throughout the work and, as I began to get deeper into the orchestration, this theme became a kind of 'Where's Wally' for this work. Sometimes it is very obvious, sometimes it is hidden and intertwined throughout the orchestration.

Movement 2: 'Plummet' describes the descent of the ducks from ship deck to sea surface. As the sunlight glistens on the ocean spray, the stupidly grinning ducks plummet to the ocean surface in a four-minute slow motion snapshot of the event.

Movement 3: 'Trash Vortex' - an American term for the North Pacific Garbage Patch, a huge circular ocean current that collects marine debris, especially plastics. The disturbing fact about the plastics is their ability to break down - but only to a molecular level. The term 'chemical soup' has been coined, which describes the texture of this breakdown. The 'soup' is able to be inhaled by fish and other sea life as well as forming a chemical sludge on the surface of the ocean. This movement is textural and remains relevant as the ducks are still circling in the vortex 22 years later. The Disneyesque characterisation from 'Awakening' and 'Plummet' is thrown aside and the reality of the rubbish within this ocean system is highlighted. An albatross flying low over the Trash Vortex ends the work, depicted by first a violin and then a double bass solo.

Just as Matthew Quick introduced various species into his paintings (ducks, shopping trolleys, etc.), it occurred to me that I could add my own 'species' into the orchestra. On request, the MSO kindly allowed me to add extra instrumentation to the orchestra: saxophones (soprano doubled with baritone saxophone), a bass clarinet, and an additional percussion player, also a pickup microphone, an amplifier and a delay machine for the double bass player. But adding instruments and a bit of technology (although very pleasing in sound, to me) didn't seem quite enough.

I fantasised briefly with the idea of players playing rubbish. Although adding rubbish to the orchestra (plastic bottles, cans etc. instead of bows, or preparing instruments with plastic bags) would be an analogy for how we are adding rubbish to a quite beautiful and complex ocean system, and so perfectly aligned with the intention of the work, I felt I was the one who needed to and should carry the burden of the destruction, not the MSO!

So, I introduced my own favourite melodies, textures and sound-worlds from other pieces I have composed, and threw them into the Trash Vortex movement. I mixed them up with the 'surging, dirge' (the opening description alongside the tempo marking for movement 3) and allowed them to disintegrate, be overwhelmed and distort. It was both exhilarating and devastating. These musical ideas are mostly extracted from the works No Ordinary Traveller (2006) and The Empty Quarter (2008) although there are elements of other works in there too, for instance Aspects of Dreaming (2006)

During the presentations, we pulled apart some of the main themes, orchestrations and hidden factors. I also believe it is useful to demystify the composition process for students and that's why we spent time discussing some of the troubling issues that arose during the compositional process: we listened to 'before' and 'after' moments and talked about ways to move forward when one hits a roadblock.

As per the brief for 'Up Close and Musical', a process diary and analysis was developed for teachers, including ideas for composition and active listening activities for the classroom.

To hear my orchestral work rehearsed, recorded and presented multiple times in one week, of course was a joy. I did, in the end, succumb to the addition of rubbish, and in all presentations students played the introduced species of plastic bags (not attached to any instrument) alongside the MSO and gave me their opinion as to whether or not it sounded cheesy. The questions were thoughtful and varied and interesting - and, for the record, I am not related to the Prime Minister!