On 21 March 2012, the prestigious Don Banks Award will be presented to Jon Rose, one of Australia's most eclectic experimental musicians - a violinist, a composer, and an improviser whose creativity knows no bounds. Musicologist Richard Toop has been peering through the fence since the 1970s, amazed and impressed. (Read also: Martin Wesley-Smith's article 'Larrikin par excellence'; news article about the Award.)

When I first came across Jon Rose in the late 1970s, we seemed to be on totally opposite sides of the Radical New Music fence. As I recollect, absolutely no personal hostility was involved (which was certainly not the case with some others…), but from Jon's point of view I must have seemed, pretty much, to embody The Enemy. It wasn't so much that I was a musicologist (that probably didn't even merit serious consideration), or even that I was Anglo-European; as it happens, Jon was born pretty close to Maidstone, in Kent, which my father often visited on company (brewery) business. The trouble, as he saw it, was that I was irredeemably associated with those guys like Stockhausen and, worse still, Ferneyhough, who not only wrote 'dots' scores that allowed no scope for improvisation, but were so complex and specific that the performer had no room to do anything personal except squirm.

One could argue about this, but there was certainly one thing (leaving aside the fact that Jon was a brilliant performer, and I absolutely wasn't) that set us significantly apart: I was a classic Late Modernist purist, while Jon was a wildly eclectic (hyper-inventive) post-modernist. I don't think we would have consciously categorised ourselves that or any other way at the time, but in retrospect, it seems like a fair summary. 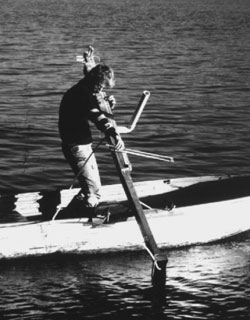 Another significant difference was this: I was (and still am) pretty unengaged with popular culture. Sure, as a 1960s kid living on the fringe of London, I was greatly intrigued by Pink Floyd, Zappa's Mothers of Invention, Jimi Hendrix and Captain Beefheart, and had some respect for classic blues singers. But the daily bread of pop left me devoid of appetite. So encountering things like the Tango LP Jon made with Martin Wesley-Smith, I found myself wondering, 'Why does such a gifted guy want to bother with this cheesy tango medium?' The answer, had I been able to handle it, should have been perfectly obvious: this music was part of his natural daily world, and if he was critical of it (perhaps of its banal self-repetition rather than its essence), he expressed this not through rejection, but through radical reinvention. In this context, I guess, Martin was a natural ally. On the one hand, he was at the cutting edge of electronic music in Australia; he was probably the first composer to really come to terms with the Fairlight CMI. But Martin, just as much as Jon, had roots in popular music; in student years he had been part of a folk music trio.

By the mid-1980s, at the point where his first grand project - 'The Relative Violin' - was starting to crystallise, Jon made a decision that he shared with many Australian 'dots' composers, namely that he could make more progress towards realising his visions (and yes, let's state the obvious: Jon is a classic 'visionary', but minus all the pretensions that normally attach to this) by going overseas. Given the tsunami of aesthetic neo-conservatism that was about to flood Australia in the immediate wake of the Bicentennial, this proved to be a pretty astute judgement. Jon's choice fell on (West) Berlin: in those days by no means the obvious 'cultural Mecca' choice it would be now, but a city with a thriving, abrasive counter-culture.

These days, in the internet era, one would have been able to follow almost his every move, but back in the '80s that wasn't so. So, for a while, Jon's work rather drifted to the edge of my consciousness, and I had no idea about things like his extraordinary innovations in instrument design. What I did start to become aware of was his unique contribution to the so-called Hörspiel (Ear-Play) medium, a genre poised delightfully precariously between music and 'radio play' that had been pioneered by Charles Amirkhanian in the States and Mauricio Kagel in Cologne.

Here, even before Jon went overseas, there was a Sydney-Cologne connection, between the legendary, laid-back Andrew McLennan at the ABC in Sydney, and the somewhat more intense Klaus Schöning at West German Radio (WDR) in Cologne. And in subsequent years, both ABC and WDR consistently commissioned new works from Jon. In every one of them, the violin plays some sort of role, sometimes flagrantly in the foreground (Violin Music for Supermarkets, 1994), sometimes lurking in the shadows.

One can't begin to summarise these works here, but many of them have a typically mordant, hyper-intelligent humour. A notable example is The Long Sufferings of Anna Magdalena Bach (1997), in the opening minutes of which a chronological list of Bach's offspring is underpinned by increasingly drastic sounds of labour pains. On the other hand, some of the works with an explicitly Australian focus have a decidedly affectionate orientation; an example is Syd and George (2007), which chronicles the relationship between a park ranger and an Albert's Lyrebird.

This is a really important aspect of Rose's work that I think relatively few people in Australia are aware of. In terms of concrete, enduring outcomes, these many works (about fifty to date) are his major 'compositional' legacy, sitting proudly alongside his legacy as an improviser/performer. One can get glimpses of it by dipping into his gloriously labyrinthine website (like everything else about him, an act of ongoing obsession), but frustratingly, only in terms of excerpts. So here, knowing that she will surely read this, may I whisper into the internet ear of another of Australia's cultural treasures: record producer Belinda Webster? Dear Belinda, Tall Poppies has made many wonderful contributions to the diffusion of Australian music (and Australian artists), but might there not also be room for a Jon Rose Ear-Play series? And Arts Council readers, wouldn't you like to give Belinda a grant to make this possible?

Jon's work has always been socially 'critical', and, in later years, it has gained a more explicitly political dimension (another thing he has in common with Martin Wesley-Smith). But whereas so many politically orientated artists seem to place their main emphasis and self-vindication on Righteous Anger, Jon's work in this area has always also had an exuberance arising from the act of performance.

Nietzsche spoke of 'La Gaia Scienzia'; with Jon, perhaps, we can celebrate a 'Gaia Resistenza'. When Jon elicits music from Australia's wire fences with all their history of segregations, or even more provocatively from the fences set up in Sydney in 2007 to protect APEC World Leaders from the rest of humanity, the protest element is obvious, but it is enhanced by an obvious joy in exploring the sonic possibilities of these otherwise deplorable artefacts. Isn't this, perhaps, a model for socially engaged art? At any rate, we have very, very much to thank Jon for.

Richard Toop, born 1945 in Chichester, England, emigrated to Australia in late 1975 to take up a post at what is currently the NSW Conservatorium of Music (University of Sydney). Retired in 2010, he is now Honorary Reader in Musicology. He recently curated a series of new and updated Grove entries on Australian music, contributing the one on Jon Rose himself.