A 90-year-old man wanted to make a difference in children's lives. The result is TunED-Up!, the Sydney Symphony Orchestra's professional learning program, which, in just two years, has created a groundswell of enthusiasm among the NSW public school teachers. Experiences and ideas from TunED-Up! workshops are being discussed and shared on social media, and the network of teachers within the program's reach is increasing steadily. We asked the orchestra's Director of Learning and Engagement Kim Waldock to explain what this program does, how it came about, and what is in store for its future.

Kim Waldock's work for the Sydney Symphony Orchestra's Learning and Engagement programs was acknowledged in the 2014 Art Music Awards with a NSW Stage Award in the category Excellence in Music Education. Waldock will leave the Sydney Symphony Orchestra in May 2015 in order to start in a new job in London as General Manager of Learning and Participation at the Royal Opera House, Covent Garden in London.

The Sydney Symphony Orchestra's TunED-Up program for K-6 teachers without specialist skills in music has been running for two years. It was initiated by a donor, Fred Street, who came to the SSO with a simple question: 'I'm soon 90 years old, I have some money, and I want to make a difference in some kids' life. How shall we do it?'

The idea came to Kim Waldock immediately: invest in teachers. 'Because if the teachers make music a part of the daily classroom life, that has a huge, profound influence on kids, year after year, and it rubs off on the class next door. So that's how it started.'

TunED-Up! ran for the first time in the beginning of January 2014. In January 2015, a second group of teachers gave up a week of their holidays and travelled to Sydney to learn. The program was initially offered only to teachers in regional public schools but even so there was room for only half of the applicants. For 2015, some new donors joined the effort, and a second week of TunED-Up training became possible - 50 participants in all. 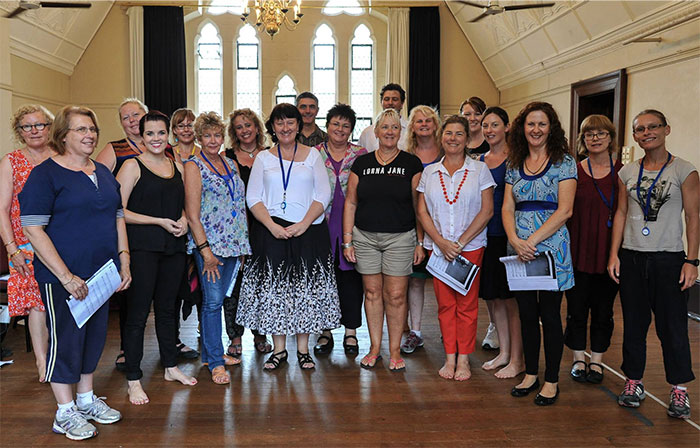 All TunED-Up participants get a scholarship: travel to Sydney is not covered but accommodation, living costs, tuition and resources are. Living and working together for a week brings the participants together in a very special way.

'They come and live in St Paul's College, they have a chance to get to know each other and that's what makes it a bit life-changing. Because they have a network for life now', Kim Waldock explains.

Requirements don't include musical literacy but all participants must have at least three years of classroom experience, 'so that they know what they need as a teacher'. Applicants are asked simple questions such as 'why is it you that you want this training' and 'how will you use it in your community'. Their background varies greatly: many have been involved in music in some way but not necessarily as teachers of music.

'They might say, "I've been designated the choir person the past five years and I don't know what I'm doing". Or: "I used to play recorder at the school", or "I played the clarinet for years", or "I can play piano up to Grade 6 but don't know how to teach music". So what we're doing is very much about pedagogy and methods for training those things', Waldock says

Forty hours of TunED-Up training includes general sessions about evaluating the participants' abilities, building a music vocabulary, a Choral Boot Camp, sessions about integrated learning, literacy, classroom composing, performance, listening, movement and programming. In addition to Waldock, the team so far has included a kindergarten music specialist, a choral specialist, and a percussionist from the orchestra. The participants meet the orchestra and sit in on rehearsals.

A particular area has been identified where work is needed: building up a teacher's confidence. In many cases a classroom teacher has had only a few hours of formal training in music as part of their four-year training. But how do you teach confidence - confidence to run and come up with activities, be creative and to sing in front of a class?

'Well, because we just do the activities over and over, the teachers will go away with a whole new repertoire of songs and material they can use - so that's a starting point. We give them a whole bunch of ideas for enhancing an item for, say, an assembly: "this is how you might do a musical item", or "if you're doing a play, you could have all these components". In most cases teachers are quite creative and very experienced, so it's really about bringing the ideas together and joining the dots', Kim Waldock explains.

A Facebook group is set up for the participants to keep in touch, to share classroom ideas and experiences. The work continues in schools, with TunED-Up participants influencing and training other teachers.

What about teachers who were not selected to participate in TunED-Up? And teachers who have even less involvement with music, and perhaps no music literacy skills at all?

'We've tried to help those teachers with the resources we write for SSO's schools concerts - these resources are at a very basic level, and they come with a digital component they can use - but that's a band-aid, that's not fixing the problem. A big part of what we try to get the TunED-Up teachers to do is encourage them, when they go back to the school, to do something in the staff meeting - they could teach everybody a song so they can use it in their classroom, or do some team teaching, or swap lessons. I had a teacher come back this year, who said that one of the things they did was to sing a song in class after lunch every day. The kids loved it so they sang it on the playground, and soon all other kids wanted to learn the song, too, so their teachers came and asked about this new song. It's infectious - like rabies! That's what I'm hoping the effect of this program is going to be', Waldock says.

Waldock's time with the Sydney Symphony Orchestra is coming to an end this May. More than six years with the orchestra have turned a former school teacher into a different kind of professional - she describes the time as 'a whole reinvention' of herself. Waldock came to the orchestra from Sydney Grammar School where she was a music subject master - she had also been involved in writing the music part of the Australian Curriculum and been an HSC (the NSW Higher School Certificate) examiner, travelling around the state. This network would prove valuable in her SSO job.

The SSO's Learning and Engagement Program with all its components - including the Meet the Music concerts, seminars and resources, schools concerts and open rehearsals, professional learning for teachers, composer development, outreach concerts and regional tours - contributes to the orchestra's bottom line significantly, bringing significant levels of funding to the SSO each year. The activities delivered by this department make up about one third of the Sydney Symphony's activity each year.

'It's the orchestra that delivers the program', Waldock stresses. 'That's what I've learned since leaving school teaching - that our greatest asset obviously is the orchestra itself. How can we find things that are interesting to the orchestra, that stimulate them and that are not too far from what our core activity - so it's cost effective? And how can we do something different to capture the imagination of the public?'

The International Outreach Program has taken the orchestra to South Korea and China. Leading conservatories and international schools in these countries, with their strong emphasis in soloist skills, have benefited from the Sydney Symphony Orchestra's guidance in playing as an ensemble.

'What we can offer as the Sydney Symphony is how we work as a team, in an ensemble. When we were in Beijing last year, the Beijing Conservatory wanted our concert masters and principals to do masterclasses, and I said, 'We could do that but you've got the Berlin Philharmonic and all these other orchestras doing the same, why don't we do what we do best: getting an orchestra to play together and work an ensemble? It's trying to find out what's our niche - and doing it this way also means that more of the orchestra can get involved and be invested in it.'

Walcock's new position as General manager of learning and participation at the Royal Opera House in London will most likely mean a somewhat less hands-on involvement than what she is used to in her current job - she is known to stay up all night writing out orchestral parts for, say, a Strauss Polka, if that's what is needed to get school students or amateur players involved in an outreach concert.

"It will be nice to have a different sort of challenge and to be thinking much more of the big picture, the business side of things, the strategic direction", Waldock says about her new role.

The immediate future of the TunED-Up program will include a 'Topped Up' component this coming winter, with all participants of the two TunED-Up programs so far coming back to Sydney for two days to spend some time with the orchestra and its musicians and to meet all the other TunED-Up people.

Fred and Dorothy Street, the original donors who inspired the whole program, are keen to see it continue. 'Light the fire, and keep stoking the fire', as Fred Street himself put it.

'This year he came along to both weeks, I made him sing, I made him dance, I made him do everything. I think he'll probably look after it so that it can continue. Because he can see the fruits of it already, and that's great. He had an amazing music teacher in Vienna when he was growing up. His love for music is because this teacher inspired him so much.'