Jon Rose is not just a musician. He's an artist (and educator, lecturer, innovator, inventor, writer) whose work flows across different media and art forms: improvisation, composition, performance, performance art, radio programs, radiophonic works, environmental events, soundscapes, theatre pieces, images, graphic design, Super 8 films, videos, websites, instrument design and construction, choreography, installations, multimedia, political art, texts, books, CDs, DVDs, and more. With enormous energy and originality, well-honed organisational and practical skills, good humour, healthy irreverence, and a constant stream of ideas, he moves freely between and over the fences we build between art forms, stopping along the way to play them. I know of no other Australian musician whose output is so enormous, so eclectic. Who else is equally at home with and excited by high-tech instruments, like the interactive MIDI violin bow he invented, and found object instruments like bones and bottles?

I once collaborated with Jon on a free-form improvisation project that involved concerts in Sydney and Paris and an LP called Tango. Not only was he always coming up with excellent ideas and cool titles (e.g. Three Coffins for Paganini), and pushing me to extract yet more from the Fairlight CMI that I was playing, but at the same time he was organising the gig he was doing after the one after next. There's little relaxation for the full-time gigging improviser, what with chasing up opportunities, planning projects, applying for grants, writing reports on previous grants, performing gigs, mostly for little money and all the while travelling constantly, sleeping on friends' floors, making do. Jon is able to do all that yet still produce thought-provoking, wildly entertaining, clever, challenging, vital, sometimes outrageous, sometimes extremely serious original work. 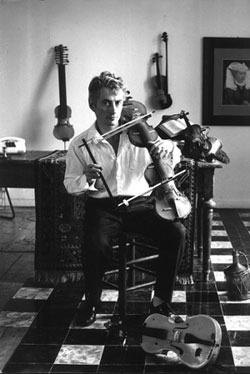 When I taught at the Sydney Conservatorium of Music I suggested we keep a full-time position available for short-term or part-time appointments for footloose fancy-free-form fiddlers and other musical mavericks needing the occasional helping hand. It didn't happen, although we managed to give a few weeks' employment to a few outsiders, such as Tony Oxley, Rik Rue and Trevor Wishart, as well as to a few relative mainstreamers like Tristram Cary. It was good for students to be exposed, I believed, to a wide range of musical thought and practice. What might they have picked up from Jon? The courage to follow ideas to their limit, to explore their every aspect, to take things to extremes, to develop limitless imagination, to step out of the box, to tear down the barriers, to refuse to be constrained, to make sense of the nonsense, but also the courage to do one's own thing, even if that were to involve making one's own box and sitting in it in the dark.

There is no correct way to do things. Nor is one way of doing things necessarily better than any other. Everyone's different, with different skills, temperament, personal philosophy, and a unique contribution to make. Music can be found in the most unlikely places, often made by people with no formal training at all. Jon has located many of them and brought them to our attention through the magnificent website Australia Ad Lib. The sonic explorers we meet and hear here include spooners Liz Dall and Fancy Nancy, lip chirper Pedro Petersen, vocal mimic Xe Rui Fa, bell ringers, spanner player John Drummond, tin doggers, lagerphonists, Col-E-Flower and his Vegie music, the brilliant Michael A. Greene, who can whistle one tune while humming another, the Ntaria (Hermannsburg) Aboriginal Women's Choir, washboardist Deborah Lee Smith, whip-cracker Ashley Brophy, erhu virtuoso Shen Pangeng, and relatively well-known Graingerites, all under such headings as Backyard Hackers, Larrikins and Noise. They all have a contribution to make to the Great Australian Symphony.

'You won't find many of these musicians listed in the official annals of Australian music. But together they probably produce a more authentic, contemporary sound portrait of the fifth continent than you're likely to hear at the opera, in the concert hall, at a jazz gig, or from a local DJ.'

Take a week off and listen to the lot. Or dip into it occasionally when feeling low and needing some inspiration.

Keeping a record of Australia's diverse music-making, particularly that which is weird, off-the-wall, non-mainstream, non-professional, original, and/or homely, is important. Official libraries, archives, museums, etc. tend to concentrate on official music-making. That's important too, of course, but the stuff we haven't known about is not only musically fascinating in its own right but equally fascinating as part of our cultural history and understanding. Jon gave the 2007 Peggy Glanville-Hicks Memorial Address - 'Listening to history: some proposals for reclaiming the practice of music' - based on what he has unearthed through Australia Ad Lib. (The talk has been published in six journals, including the Massachusetts Institute of Technology's prestigious Leonardo Music Journal - an excerpt is available on Resonate.)

He also turned the project into a production called Pannikin (Melbourne Festival, 2005), which featured an Aboriginal gumleafer, a chainsaw orchestra, an exponent of amplified glass, a whip virtuoso, a department store pianist, a singing dingo, an auctioneer, Broken Hill's last remaining brass band, Australia's longest-serving cinema organist, the inventor of clicking music, and Andreas Hadjisavvas, an immigrant from Cyprus who composed the 'Thank You Very Much' song for his convenience store in Surry Hills. Jon's generosity of spirit sees fellow travellers getting a leg up wherever possible.

Jon has been soloist in a performance of the Tchaikovsky Violin Concerto with the BBC Scottish Symphony Orchestra conducted by Ilan Volkov - playing a new, improvised solo part. It seems to me that here he is simultaneously paying respect to an established piece while deconstructing it and using it to create something new, just as we did with Tango. Outrageous! Courageous, too. Playing with a tango is all very well, but fiddle with Tchaikovsky and do so at your peril!

In juxtaposing the so-called 'serious' and 'absurd', Jon asks pertinent questions about contemporary culture, refusing to let mainstream music-making take anything for granted. He writes: the '200-year-old European model of music as gratuitous entertainment … [is] something of an aberration compared to the more common notion amongst most societies that music be a function of communal activity, ceremony or ritual.' Thus a lot of his work eschews the standard concert model, seeking audiences that are more than passive listeners.

On the Australia Ad Lib website Jon provides an online application which people can use to create their own pieces by mixing, their way, the sequences provided. He encourages people to be creative, and helps facilitate that. He often eschews the standard concert hall, too, performing anywhere from shopping centres to Japanese night clubs. And on fences, wherever they are, from Outback Australia to the USA/Mexico border fence, to the Separation Fence near Ramallah.

Instead of Australia being traversed by millions of miles of fencing, Jon sees that it is in fact covered with millions of miles of string instrument demanding to be plucked, bowed, stroked and struck. The Kronos Quartet came across the idea by chance when the project was installed (complete with a real fence) at the Gallery of New South Wales in 2004, with over 20,000 visitors witnessing the phenomenon over a three-week period. The quartet was so impressed that it included Jon's 2009 piece Music from 4 Fences in some of its concerts.

Since 2002, Jon, accompanied by his violinist/composer/ornithologist wife Dr Hollis Taylor, has covered tens of thousands of kilometres in the Outback, playing and recording the nation's fences. Hollis's book and DVD about the experience - post impressions, a travel book for tragic intellectuals - is a great read, watch and listen.

Jon's fence-playing takes on an overt political dimension when the instrument he is playing - the USA/Mexico border fence at Sasabe in the Sonoran Desert, for example - is there to keep people in, or out, or away from each other. Here, as always, he is aware of music's social context. And its social function: music must again, he believes, become fundamental to the operation of society, as it was in many ancient societies.

This underpins everything he does. Thus, using transmission technologies and sensors that measure movement and speed of movement, he has turned physical activities and sports into musical and sometimes mixed-media compositions. So far, there have been netball games (Team Music), pieces for kites and kayaks, and a giant environmental ball piece (Sphere of Influence).

The largest project to date has been Pursuit - a whole chamber orchestra of bicycle-powered musical instruments in a genuine community project featuring bus drivers, a dentist, teachers, an architect, a trade union official, couriers, the penny farthing champion of Australia, and even a state premier. Music as a function of communal activity, again.

Jon sees the word 'larrikin' referring to 'the rebel, the anti-establishment figure, the irreverent individualist, the political activist, the spirit of the wild colonial boy/girl'. There was a streak of larrikinism in Don Banks, tempered by his times and circumstances: he would have been thrilled to know that an award in his name was going to a larrikin par excellence: Jon Rose.

Adelaide-born composer Martin Wesley-Smith established the Electronic Music Studio at the Sydney Conservatorium of Music, teaching there for 26 years till he resigned in 2000. He now lives in Kangaroo Valley, New South Wales, where he composes, puts on fund-raising concerts, grows vegetables and keeps chooks.