Malcolm Gillies talks with Moya Henderson about her new work, G'day Africa IV, which recently premiered at the Canberra International Music Festival, and looks back on her G'day Africa I-III set, also performed at the same concert.

If you look at Moya Henderson's website www.moyahenderson.com, a cheery 'G'day' immediately catches your eye. There is her site's welcome, and also its request on departure to leave a message to say 'G'day'. Then there is her G'day USA, scored both for solo horn and for solo clarinet, from 2003, just before Australia adopted this cheery title for its soft diplomacy program in America.

G'day Africa, however, originated much earlier, indeed in the late 1970s. Henderson had met up with a fellow alumnus of Stockhausen's composition class, Kevin Volans, who introduced her to a recording of African folk music. Under its spell she started to write 'prequels' to what eventually became her first G'day Africa composition. Commissioned in 1990 by Perihelion, the University of Queensland's new clarinet-viola-cello-piano quartet, G'day Africa I celebrated Nelson Mandela's recent release from prison, and the growing hopes for a post-apartheid South Africa. Its up-beat mood and stipulated 'characteristic African energies' were popular with Perihelion's audiences. The seven-minute work's outer sections particularly highlight the jaunty but mellifluous qualities of the clarinet; its middle sections are characterised by the deeper tones of bass clarinet and some 'ethereal' sliding harmonics on the strings. The work was recorded on the ensemble's Points of Departure CD (Tall Poppies, 1994), and led to two more commissions from Henderson: G'day Africa II and III, both completed in 1995, and premiered by Perihelion at the Sydney Spring Festival in 1998. 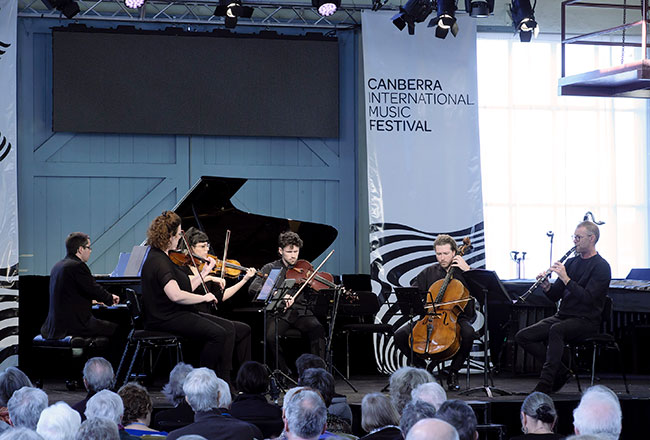 G'day Africa II is a shorter piece that draws on further material provided by Volans. Its ground bass, repeated throughout Henderson's work on pizzicato cello, with rhythmically complementary material on pizzicato viola, refers to the southern African 'thumb piano', where metal strips are plucked with the thumbs or fingers over a wooden or gourd resonator. In contrast to the exuberance of G'day Africa I, this is music of grief, led by the clarinet, with high-pitched rattles of Shona music evoked on the piano. I asked Henderson about its 'desolate' intent, and she confided that this was a time of her own and her family's helplessless, awaiting the deaths of two of her brothers.

G'day Africa III returns to the joyful style of G'day Africa I, with rapidly changing metres, textures, dynamics, and the constant interplay of all possible instrumental combinations within the quartet. The viola player is even required energetically to 'hum', as well as play, in mid-course, as the music moves from a boisterous into a more rhapsodic concluding mood. Amid much upper-register play and louder dynamics, the cello, and, sometimes, the viola, are less prominent, except in more solo moments.

The Canberra Festival's performance of G'day Africa I-III on 11 May 2019 was in the skilled, and gentle, hands of the impromptu quartet of Jason Noble (clarinet, bass clarinet), James Wannan (viola), Blair Harris (cello) and the Festival's artistic director, Roland Peelman (piano). They rendered celebratory and desolate moods with equal conviction. Asked about the performances, and her working with this quartet in rehearsal, Henderson highlighted their curiosity and constant search for new, often more emotional, ways of interpreting her scores. This was, in her words, an 'enchantment for the composer'.

G'day Africa IV, which was premiered later at this same Canberra concert, presented a rather different proposition. With the same name, and intention to 'capture something of the original fiery spark found in the first three G'days' (original score, preface), IV is written for an expanded ensemble: clarinet, string quartet and piano, as requested by the Festival. With this new balance of instruments, the strings become more regularly the base of the ensemble's sound, and nowhere more so than in the work's middle section, where Henderson returns to the two-part, rhythmically complementary ground of G'day Africa II, still on pizzicato viola and cello, but now in a retrograde inversion. Here and elsewhere, the clarinet surrenders some of that primary role heard in I-III, becoming a complement to, even partner with, the first violin. The cello, meanwhile, shows more independence, amid the more complex part-writing of this larger ensemble. Texturally, the piece is full of accents, which Henderson explains in a score note, as evoking the African kalimba and drums. G'day Africa IV was commissioned by (and dedicated to) Dr John Davies of Brisbane, who has been a long-time champion of Henderson's work. Forty-seven years ago he played the piano in several of Henderson's pieces during an early composition recital at the University of Queensland.

The Canberra premiere of G'day Africa IV was played with vigour and subtlety by the youthful Penny Quartet of Melbourne (Amy Brookman, Madeleine Jevons, Anthony Chataway, Jack Ward), with Jason Noble again on clarinet and Edward Neeman at the piano. The work, and its performers, gained a rousing reception from the Festival audience. Henderson later commented: 'I suppose I didn't expect such a truly polished and meticulously rehearsed performance. I was absolutely thrilled with the sextet... Their melting away at the close was ecstatic... perfection.' Asked about anything she would now change in the work, she humbly noted: 'I will change the dynamics for the other instruments where the cello has a short solo.' But her joy was palpable: 'This concert is right up there with the best I've ever been part of.'

With such an important premiere as this, I was keen to find answers to some broader questions. Was there an explicitly Bachian aspect to these pieces, given that the concert was entitled 'Bach in Africa'? Henderson equivocated, like a veteran politician: 'I wrote in my own recent style', she replied, 'but nor was I about to skimp on contrapuntal writing'. I was also interested in how she found the programming, in which her four 'African' pieces were interspersed between five short performances on West African kora by Lansana Camara, from Guinea and now resident in Australia. It was 'inspired', Henderson shot back: 'I could hear definite idiomatic (rhythmic and melodic) connections between the two strands... certainly, John Davies, who sat beside me at the concert, commented immediately that G'day Africa I seemed to flow right out of the opening kora piece'.

So, is this the close of the G'day Africa series? 'I'm available to write whatever is requested, slogger that I am', commented Henderson. I take that as a provisional 'no' to my question, and look forward one day soon to hearing G'day Africa V.

Malcolm Gillies is a musicologist and arts critic, now resident in Canberra.