..although at first they did no more than sing the music they had sung at home, they increasingly came to sing it in ways that were changed by the wilderness.
(Wilfrid Mellers: Music in a New Found Land) 1

David Malouf's 2003 essay Made in England: Australia's British Inheritance, has come to mind many, many times since I moved from Australia to England in 2007, and then from there to another former British colony, the USA, in 2008. Like any immigrant, I'm sure, I engage daily in the almost involuntary exercise of comparing and analysing the differences, some tiny and trivial, some grand and consequential, between the country I'm from and the country where I now live.

One thing all this navel-gazing has taught me is that I'm a New World person. When I read Clive James's recent poem 'Sentenced to Life' in which he makes clear he expects to die in England, and soon, I was overcome by a horrified grief, a sudden, visceral heartbreak, that a person from the New World might die in the Old. Is it old-fashioned to talk about the New World and the Old World? Surely it is. But when I travel between Europe and the US and Australia, and I do it a fair amount for my work, I find it's the terminology that best fits the experience.

When I'm in Europe, my attention is consumed by what's oppressive about having the history of civilisation crawling all over you, heavy on top of you. My attention is ruled by sheer oldness, and people, and the things they've done inside buildings. Joni Mitchell is always in my head: 'It's too old and cold and settled in its ways here.' In America and Australia, Nature, despite our habits of neglect and destruction, wins out in the battle for my attention. She drowns everyone out.

I like to think my new album, Nature, recorded with pianist Nicole Panizza (an Australian who, it must be said, lives in England), and featuring New World composers setting New World poets, draws on the work of like minds. In the mix we have Ross Edwards, Wallace Stevens, Aaron Copland, Judith Wright, Walt Whitman, Emily Dickinson, Peggy Glanville-Hicks, and Nigel Butterley. Nature has their attention too.

For Edwards, Wright, Whitman, and Dickinson especially, the wilderness in which they found themselves was, and for Edwards of course still is, 'both a home for objects of the natural world and the source of regenerative, creative potential' 2. Of a period of what might be called composer's block, Edwards said:

During this time my only serious listening was done sitting in the bush, listening more carefully than most of us get a chance to do to the natural sounds . . . It helped me come to terms with the fact that all of the world's music must have originated in some way from the sounds of nature . . . . And later, when I started writing again, it was especially the insect patterns and rhythms I'd heard that helped me. 3

On this album, the Edwards work featured is The Lost Man, setting Judith Wright's poem. Wright devoted considerable energy, both on the page and off, to proclaiming that the flow of influence from nature to humankind also flows the other way. Nature's power as a 'source of regenerative, creative potential' is easily compromised in the hands of careless custodians. It's a message always present in her poetry, most sharply in 'Australia 1970'.

So many paintings, musical works, and poems that deal with the Australian landscape are said to convey an eerie sort of melancholy; indeed plenty of Wright's own poetry seems to do this. But for Wright we set that melancholy in the landscape, through our mistreatment of it. Her work consistently reveals 'a sense of sacredness in the land, the sacredness of simple things like animals and plants, and the violation of that sacredness', as her biographer, Veronica Brady, put it 4, and it seems clear she believed 'there was a fundamental mystery in the world which could not be described or empirically evaluated' 5. In this way she is a kind of modern mystic.

Nigel Butterley is often called a mystic, but he rejects the label. In an interview from 2001, Stephen Crittenden lists some of the composers who have provided Butterley with inspiration (Bruckner, Vaughan Williams, and Tippett) and notes that 'these are all composers who are spiritual, even religious composers to a very great extent, aren't they?' 'Yes, but with a very small "r"', is Butterley's reply. 6 Perhaps he would accept the suggestion that through his music he is a mystic, but with a very small "m"? Even if mysticism is not his own lived spirituality, it's certainly the topic of a great deal of his music.

Elliott Gyger has written of Butterley's affinity with Dickinson in their 'concern with the smallest and most vulnerable features of the natural world (flowers, birds, insects) as relevant to much that is profound and valuable in human experience' 7

For Nature, Nicole and I recorded Butterley's response not to Dickinson, notoriously frugal on the page, but to Whitman, her deliciously verbose contemporary. Whitman, of course, is pretty explicit about his attitude to Nature. To quote a poem:

GIVE me the splendid silent sun, with all his beams full-dazzling...
...give me Nature-give me again, O Nature, your primal sanities! 8

(In the interest of full disclosure, later in the same poem he also says:

Give me interminable eyes! give me women! give me comrades and lovers by the thousand!
Let me see new ones every day! let me hold new ones by the hand every day!
Give me such shows! give me the streets of Manhattan!
Give me Broadway, with the soldiers marching-give me the sound of the trumpets and drums!

Whitman being Whitman, he pretty much wanted everything. Excellent, insatiable man. Men would surely have been explicitly declared too, had the poem been published at some time other than 1867 and in some place other than Puritan New England.)

Dickinson, the famous recluse, could also be pretty plain about the role of the natural world in her life. In a letter to T.W. Higginson, a transcendentalist correspondent, and so probably a sympathiser of sorts, she said, 'You ask of my companions. Hills sir, and the sundown...' 9 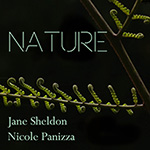 In the poems Copland chose to set, a more mystical reverence is clear in both the poetry and the musical treatment, perhaps most especially in 'Nature, the gentlest mother'. In the opening of this setting is all the evidence you need that Copland, like Edwards, must have paid close attention to the birds and the insects.

Nature is available for purchase from July 1 on iTunes, at JB Hifi and ABC Shops, and at waterfrontrecords.com. A launch concert will be held on August 9 in Adelaide, hosted by the J.M. Coetzee Centre for Creative Practice. More info: phosphorrecords.com

1) Mellers, W. (1965) Music in a new found land: themes and developments in the history of American music. [1st American ed.] New York: A.A. Knopf.
2) Cooke, S. (2008) 'Singing Up Country in the Poetry of Judith Wright and Pablo Neruda', Australian Literary Studies, 23 (4).
3) Quoted in: Stanhope, P. (1994) 'The Music of Ross Edwards: Aspects of Ritual', Master of Arts (Hons) thesis, Faculty of Creative Arts, University of Wollongong. http://ro.uow.edu.au/theses/2247
4) The quote from Veronica Brady, Judith Wright's biographer, comes from Wright's obituary in The Guardian
5) Cooke, S. (2008)
6) A transcript of Stephen Crittenden's interview with Nigel Butterley can be found on the ABC RN website.
7) Quoted in: Kirkby, J. (2009) 'Into Van Diemen's Land: Emily Dickinson in Australia' The International Reception of Emily Dickinson. 234-257. London, England: Continuum.
8) The Whitman poem quoted is 'Give me the Splendid Silent Sun', from Leaves of Grass (1867 edition). It can be found on www.whitmanarchive.org.
9) The Dickinson quote, and information about its context, can be found here: http://www.theatlantic.com/past/unbound/poetry/emilyd/edletter.htm

Jane Sheldon is an Australian soprano now based in New York. She specialises in contemporary chamber music. Upcoming engagements include the launch of her new concert series, Symbioses, in Sydney on 18 July. For more info: janesheldonsoprano.com.