Image: Soundstream Forum 2019 participants - see below for a larger view.

The Soundstream Emerging Composers' Forum was established in 2012 as a national event, creating opportunities for emerging composers through supporting the creation, workshopping, performance and recording of their works. Samantha Raftery attended the 2019 performances and revisits the works by Luke Cuerel, Olivia Davies, Christopher Williams and Elizabeth Jigalin in this article. All composers and their mentors were meant to be reconvening this October to develop their compositions further. Due to the COVID-19 pandemic, Soundstream has decided to postpone this stage of the Forum to September 2021 - this was also the preferred option of the mentees who, instead of online mentorship, wanted to refine their site-specific works within the unique surroundings of the Aldinga Scrub next year.

Last year, amongst the stunning backdrop of the Aldinga scrub, the four composers were tasked with developing a site-specific work that captured the spirit of the scrub's unique diversity. The composers approached the task in a variety of ways, offering different snapshots that captured not only the flora and fauna, but also the ecology and local environment, through varied approaches.

The performer mentors were Brisbane's Clocked Out duo, Vanessa Tomlinson and Erik Griswold, Adelaide Symphony Orchestra's composer in association and esteemed oboist, Cathy Milliken, along with Soundstream's artistic director, Gabriella Smart. The Forum culminated in two performances of the works, one in the Aldinga scrub and one at the ABC studios. These performances demonstrated the importance a venue can have on site-specific composition.

Composer and saxophonist Luke Cuerel wrote the first performed work, Generations. On the first day of the forum, Luke presented two graphic scores to the performers. The circular design and different segments of the score appeared to be symbolic of the various stages of life and renewal that can be observed in the Aldinga scrub. The first score was designed to encapsulate the local flora in the area. With plenty of specimens to choose from, the performers drew their inspiration from the native plants around them, incorporating the flora symbolically and literally into the instruments they were using. During the first performance, hard sticks and branches were placed on the snare drum, with Tomlinson creating a rapid foraging sound with the hard textured material. The prepared piano was filled with leaves from local trees, which buzzed and murmured as the piano strings were strummed. Overall, the music seemed to swirl and build with increasing depth, through the incorporation of deep harmonium tones and crashing cymbals. The second performance incorporated softer branches, which created more whispering tones to the percussive sound.

Over the course of the first forum, Cuerel discovered he could represent the local fauna in his music by taking field recordings of the local animals and turning them into synthesised sounds, accessed via keyboard. This worked particularly well in the first performance, where Smart's use of the synthesiser birdcalls actively created a mix-tape of the live birdcalls and sounds in the venue. The use of silence in the Aldinga performance venue harkened the listener's ears back to the natural sounds of the environment. This provided a wonderful interaction between the natural and the man-made, with the performers responding to the scratching, foraging and calls of the local fauna. 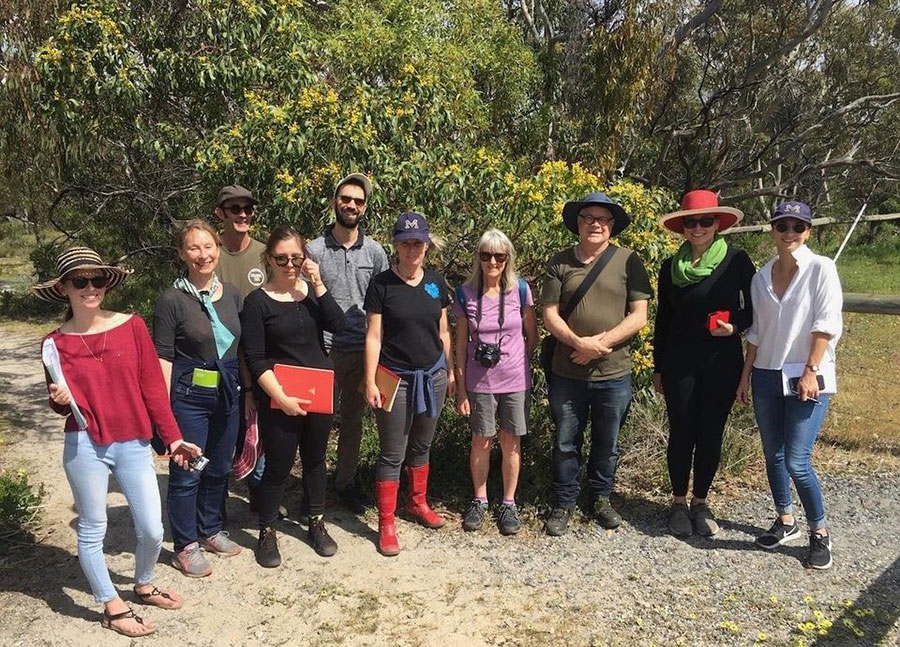 Olivia Davies's work, Notes on Sand, highlighted the importance of the sand in the Aldinga scrub. Sand is the reason that the scrub still exists today, as it prohibited farming in the area. The performers were asked to pour sand between two pieces of cardboard, which produced a sonorous hissing sound. Additionally, Davies asked the performers to identify a particular place in the scrub that resonated with them. The GPS coordinates from these locations indicated the amounts of repetitions of each performer's notated musical cell, performed on their respective instruments.

During the first concert, the interplay between the sounds of sand being poured and the wind through the trees was very similar, thereby linking the composed work with the natural world. The extended tones from traditional instruments allowed for a focus upon the various dissonant and consonant sounds that were produced. The similarity of timbre produced a collective ringing quality to the work, reminiscent of a calm, still day near the beach, with the sound of the ocean in the distance. As the worked progressed, it became thicker and darker, with the addition of low rumbles in the harmonium and louder calls from the melodica. The dissonant sounds took on a sinister edge at this low pitch with the harmonium being a continuous presence towards the end of the work.

The second concert in the dry acoustic of ABC Studio 520 removed the interplay between instruments and naturally occurring sounds. As such, the listener's attention was drawn to the different rhythms produced through the process of pouring the sand, and on the different ways in which the performers poured it. By having a stronger focus on the traditional instruments, it became obvious that the timbres gradually began to contrast each other more as the pitch lowered through the composition. This created the illusion of a thicker texture.

Christopher Williams's Aldinga Scrub incorporated stereo recordings of the Scrub at various times of the day. Speakers surrounding the audience induced a sense of being embraced by the sounds of the local fauna. Interestingly, the local wildlife responded enthusiastically to the performance at Aldinga Scrub, with magpies and crows joining the recorded soundscape.

Williams used descriptions and prompts to encourage performers to replicate the sounds on the recordings using traditional instruments. The work contains three sections. Section One, 'Dawn Awakening', incorporates long tones on most of the instruments, with the occasional bursts of sound from the mallets on the piano strings. This section strongly highlighted similar timbres in instruments; the oboe and theremin blended together, along with the vibraphone and prepared piano. Section Two, 'Popplebonking', replicates frog sounds through percussive effects. Prepared piano sounds seemed to best imitate the pobblebonks, whilst the bell-like toy piano and vibraphone seemed to mimic the intermittent birdcallnats contained in the recording. These were accompanied by synthesised bonk-like sounds, which seemed much more prominent in the ABC recording studios than they had in the first performance. Section Three contained calls and responses from songbirds and crows. The theremin, with delay, provided an excellent twittering bird sound, whilst the reed and bell sounds of the oboe effectively captured the squawking of the crow. The different birdcalls and effects by all of the performers provided a sense of contrast, which gradually led into a sea breeze sound. In the first performance, these sounds seemed to take longer to transition, whilst there was a more unified evolution in the second concert. Both were interesting, as the first concert seemed to highlight more of the natural world and movement, whilst the second bought more of the synthetic side of the composition to attention.

The final work, field notes, composed by Elizabeth Jigalin, was a set of miniatures inspired by Trip Advisor reviews. The performers moved fluidly between each section, using a variety of traditional and unusual instruments. Head massagers were used to evoke the twinkly sounds of ants across the vibraphone in Ant Workshop, whilst the prepared piano created individual characters for fungi in Fungal Foray. Perhaps one of the greatest differences between the two performances of this work can be found in the final miniature, Group Call. In this work, all of the performers video chatted to each other in the performance space, creating an echoing effect over the phone speakers. In the first concert, the performers gradually dispersed through the scrub, interacting with the local wildlife to produce different sounds. As this was not possible in the ABC studios, the performers instead chose to create sounds with the audience members, using necklaces and clothing materials to produce sounds. Additionally, the echoing effect lasted much longer in the confines of the ABC studio.

When considering both performances overall, the focus in each concert was drawn towards different elements of the performance. Whilst the first concert allowed for interaction between the composed work and the natural soundscape, the second performance drew the listener's attention towards the timbral effects and synthesised elements of the compositions. As such, both highlighted the compositional merits of the works in different ways and each composer was able to successfully bring the Aldinga scrub to life through vastly differing approaches. Due to the contrasting nature of the two performances, it will be interesting to see how the compositions will develop in the upcoming forum and how this will affect the performances.

Samantha Raftery is a PhD student studying animateur and music teaching artist projects and creating her own projects that link to the topic of environmental sustainability. She observed this forum to get some ideas about how to incorporate environmental elements into a composition.