One thing is common to my musical worlds - as a composer, performer, director: the delight in the moment, whether it be in the humour, the sound, the gesture or the structure of that particular experienced moment. 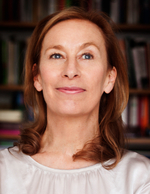 Cathy Milliken moves between manifold musical worlds, taking great joy in facilitating creativity and participation. Through the diversity and relevance of her output, and especially her multi-national collective creative projects, she has won international recognition as a leading composer, creative director, performer and educational program consultant.

Cathy has devised and composed works for theatre, opera, choir, orchestra, chamber ensembles radio and film, and created installations. She has been commissioned by the Berliner Staatsoper, Staatstheater Darmstadt, Donaueschinger Musiktage, South Bank Centre London, the ZKM (Centre for New Media) Karlsruhe, The Experimental Electronic Studio of Freiburg, as well as the CCMIX(enakis) Centre in Paris, the German Public Radio Stations of Saarland, Hessen and the Deutschlandfunk and Concerto Köln.

In 2019, her work Bright Ring, commissioned by Ensemble Modern for large ensemble, was performed under the baton of Sir George Benjamin in Wigmore Hall, Elbphilharmonie Hamburg and the Alte Oper Frankfurt, receiving enthusiastic reviews.

Earth Plays, a four-movement orchestral work, was premiered by the Bavarian Radio Orchestra and mezzo-soprano Fiona Campbell in December 2015, a commission by the prestigious Musica Viva in Munich. A later performance at the Tectonics Festival in Adelaide won the Australian ArtMusic Award in 2016. She was also a finalist in the 2017 Mario Merz International Music Prize for composers. Other Awards include "Prix Marulic" and "Prix Italia". From 2005 - 2012, Cathy Milliken was Director of the Education Program of the Berlin Philharmonic Orchestra.

Participatory compositional projects in recent years have taken her to South Africa, Japan and Oman. She is part of the creative team for the Munich Biennale for Music Theatre and serves as honorary member of advisory boards for the German Music Council and the Goethe Institute. Her collaborative composition Stadtlied (City Song) was premiered in the sold-out Elbphilharmonie in Hamburg in earlier this year.

Cathy was Composer in Association with the Adelaide Symphony Orchestra from 2018-2020, a position involving the creation of a new orchestral work each year. Other forthcoming projects include CD productions, new works for Zafraan Ensemble, LuxNM, Sydney Symphony Orchestra, Speak Percussion/ANAM, a second commission for Musica Viva of the Bavarian Radio (BRSO, Munich), two collaborative choir projects involving Arabic, Balkan and Mediterranean cultural regions (Ode to Joy and M.I.L.K.), and an opera for Sydney Chamber Opera and Ensemble Offspring.

Born in Brisbane, Australia, and based in Berlin, Cathy Milliken completed her music degree in Australia majoring in performance (piano and oboe) and continued her studies in Europe under Heinz Holliger and Maurice Bourgue, as well as completing her studies in the Dalcroze Method of teaching music. A highly specialised performer, and a founding member of the renowned group for contemporary music, Ensemble Modern Germany, Cathy Milliken has worked with many of this century's leading composers and conductors, including Pierre Boulez, Peter Eötvös, Frank Zappa, György Ligeti and Karlheinz Stockhausen (who produced her performance of Spiral on CD - published by Stockhausen Verlag Nr. 45). Cathy performs regularly with voice and oboe and is a member of Ensemble Extrakte, a Berlin based group noted for its diverse musical cultural practice.

- Interview [Audio]: Cathy Milliken interview
Interviewed by Briandain O'Shea (Producer), for Tall-Poppies.com
Cathy Milliken has been an artist many young Australian musicians have looked up to when they have travelled abroad to continue their studies in Europe. A renowned oboist, composer and music educator, Cathy has held key positions with two of the world’s leading music ensembles, Ensemble Modern and the Berlin Philharmonic Orchestra.