Vocal performer and composer Jane Sheldon writes about her Peggy Glanville-Hicks Commission, inspired by details in paintings by the Australian artist Ben Quilty. The AMC initiated this commission scheme earlier in 2020, in response to the challenges caused by the COVID-19 pandemic. Find out about the thirteen artists and their projects on the Peggy Glanville-Hicks Commissions subpage. 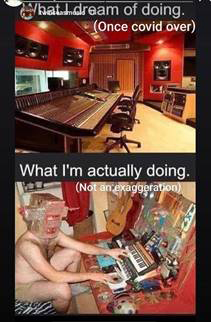 The image on the left was going around in early May. I wish I knew who created it. I saw it shortly after I had applied for support from the AMC's Peggy Glanville-Hicks Commissions initiative and it seemed to have been made just for me. Me and everyone I know. The fact that it has always been true that some percentage of the music I listen to was created perfectly well in the circumstances shown in the lower image (minus the headgear perhaps) didn't make it less darkly funny.

Like all musicians, I have my pandemic lament, deeply felt, while acknowledging that a great many people have been cast into far worse circumstances. (And I am one of the seeming abundance of suspect weirdos who actually likes the day-to-day of lockdown, so I got lucky there.) After organising 2020 to carefully balance time for composing with performing commitments, all the performing vanished overnight, like it did for everyone else, and so too vanished any hope of my compositions being played anytime soon. Like it did for everyone else. The speed with which music organisations worked to make bits of funding available was impressive and moving, especially considering that the people who were working to make it available had had their own lives turned inside out too.

I decided that if I was really going to make use of the time I had carved out for composing this year, I was going to have to work with electronics. I have a lot of experience performing with electronics, but in that role I'm never fully responsible for how they sound; composing with them would be very different. So the expression of interest that I submitted in response to the commissioning initiative callout was designed to corner myself: if I got the funding I would have to learn, on a schedule, how to work with these materials, creating works out of a combination of field recordings, some amount of digital synthesis, and homemade recordings of sounds from my own voice and breath.

I put together a small library of these voice and breath sounds the same way every other musician made recordings in May, which is to say, standing in my wardrobe, clutching a zoom recorder and encircled by a precarious arrangement of foam from Bunnings. As I did this, I thought of the British painter Chantal Joffe, who said of self-portraiture, 'I think there are points in painting when there is literally nothing else you can do. You've got you, and you've got paint.' I've got me and I've got a DAW. And in the end I was glad to be so constrained. The imposition of external constraints on creative work is nothing to complain about in particular, especially considering how much of the compositional process can itself be about determining a set of constraints to work within.

I used the project to reflect on the work of another self-portraitist, Ben Quilty, whose gorgeous and grotesque rendering of mouths I adore. They seemed like fertile ground given that my own sonic palette would be heavily influenced by what sounds I could make with my own mouth. It also seemed like a good time to make a work so deeply of the body, given how obsessive we were all becoming about bodies, mouths especially, as objects of fear.

I'm grateful to the AMC for their support and for Ben Quilty's generous permission to reproduce his paintings as part of the work.

A longer essay on the gestation of this composition and on the practice of reiterative self-portraiture will be published later this month on ADSR zine.