There's a way of always understanding the world in systems and relationships - this is the basis of my composition, which is expressed in ways that I am always developing. 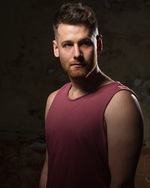 Andrew Batt-Rawden (b.1984) is a Sydney (Australia) based performance and sound/music artist with an interest in human nature, natural environment and technology.

Since graduating from the Sydney Conservatorium in 2006, his works had been entirely score-based music composition, acoustic or fixed-media electroacoustic, mostly for chamber music settings, until 2015. It was then that he was commissioned by double bassist Elsen Price to write Your Warped Distant Call for mandolin and double bass duo for a Vivid Sydney performance, during the development of which Andrew connected with an ex-student of his, Ben Hinchley, to create a work involving remote-controlled responsive digital signal processing and acoustic amplified instruments. The following year in 2016, he was offered a significant residency at Gallop House in Perth, which afforded him the opportunity to follow long-held creative interests in dance, performance and physical theatre. Since those events in 2015 and 2016, much of Andrew's work has been for responsive digital signal processing, electronic media, movement and theatrical contexts with himself performing or as part of the performing ensemble. He continues to write for acoustic and electroacoustic instruments, including for himself to perform and for others to perform, and his broad skill set is reflected in his creative process and the works he makes.

He's also held artistic directorships with new music festival Aurora Festival (2011-2012) and new music collective Chronology Arts (2006-2014), as well as curated new music events for the Vivid @ Seymour program (2012-2014) and artistically directed the Bellingen Music Festival (2012-2014). In addition to his music training, he's attended various workshops and classes in performance art and dance. Highlights of his composition career include commissions by The Song Company (2013, 2015, 2017) for a number of tours, a collaboration with Sarah-Vyne Vassallo and DirtyFeet for Morphic (2013), a collaboration with visual artist Wendy Sharpe and the Sydney Art Quartet (2017) that saw him posing as a nude life model whilst the quartet premiered his work 27, the USA tour of his work Love Spiral (2017) for Jocelyn Ho and the release of his first album Seven Stations (also the debut album released by Hospital Hill) which was a collaboration with poet Chris Mansell and the singers of Halcyon Ensemble (2014). In 2019 he also released his second album Adventurous Bodies which is a collection of tracks he has written for physical theatre and dance.

In addition to these projects, Andrew also teaches creative agency and composition through movement and sound for students of varying ages and abilities (junior school through to adults including those who identify as living with disability).