Music, when it comes down to it, is all about communication. 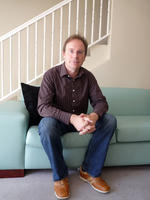 Matthew Hindson AM (b. 1968) is one of the most frequently performed and commissioned composers of his generation. His works have been performed by ensembles and orchestras throughout Australia and internationally. He has been the featured composer at national and international festivals, with orchestras, and Musica Viva. Hindson's music has been used for dance by companies such as the Birmingham Royal Ballet, San Francisco Ballet, Ballett Schindowski and the Sydney Dance Company.

Hindson's music often displays influences of popular music styles within a classical music context, and, as a result, directness and immediacy are common features in much of his music.

As well as working as a composer, Matthew Hindson is chair of the Composition Unit at the Sydney Conservatorium of Music, where is an associate professor. He has co-authored a book entitled Music Composition Toolbox, published by Science Press.

From 2004-2010 Hindson was the artistic director of the award-winning Aurora Festival, a festival of contemporary music based in Western Sydney dedicated to the work of living composers. From 2010-2012, he is the Guest Music Curator for the Campbelltown Arts Centre.

In 2006 Hindson was made a member of the Order of Australia (AM) for his contributions to music composition and music education. He is the Chair of the Music Board of the Australia Council for the Arts.

- Video: Matthew Hindson on composition - In conversation with...

- Video: Matthew Hindson on being an Australian composer - In conversation with...

- Video: Matthew Hindson on setting text - In conversation with...

- Video: Matthew Hindson on recording "Insect Songs" - In conversation with...