My compositions aim to define aspects of where I live, i.e. 'place', and how I/we live - my perception of the psychological state of the society of which I am a part. 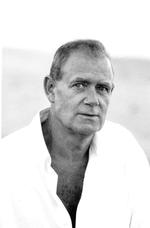 Contrary to Australia's other leading composers, Colin Bright is essentially self-taught. His early involvement in socio-political issues and his interest in Aboriginal music led to him to adopt Peter Sculthorpe as a mentor through the early seventies. He has since received composer fellowships, international fellowships and commissions from most of Australia's leading ensembles, and his music has been performed and broadcast in 27 countries around the world. Colin Bright was awarded a 2-year composer fellowship from the Music Board of the Australia Council in 2003-4.

Colin Bright's early work often includes didjeridus (Earth Spirit 1982, Fire on the Lake 1989 etc) or concentrates on creating a true Australian sound (Red Earth 1985), developments that culminate in his opera The Sinking of the Rainbow Warrior (1993/94). More recently, a number of different works have emerged in which the focus gradually shifts towards what the composer calls 'urban psychoscapes'. These pieces seek to find the essence of a writer/poet (including sampling their voice) in order to open up meta-musical and theatrical dimensions (War and Peace 1994, The Wild Boys 1996, Black Years - Red Years 1997/98, Ratsinkafka 2000, Let the Storm Break Loose 2004). His literary sources so far have included Jas Duke, Amanda Stewart and W. S. Burroughs. The Sinking of the Rainbow Warrior was performed as part of the Sydney Festival in 1997 and has since been released on CD (VAST028-2). The Wild Boys was awarded Best Composition of the Year at the Sounds Australian Awards in 1997 and was selected as the Australian entry for the 1997 Paris Rostrum. Black Years - Red Years won the NSW award for Best Composition at the 2000 Sounds Australian awards. Let the Storm Break Loose was short-listed for Best Composition at the 2005 Sounds Australian/APRA awards. The Last Whale was awarded Best Composition by an Australian Composer in the 2008 Classical Music Awards.

In 2007, Colin Bright was selected to reside with the Auckland Philharmonia Orchestra, as part of the fourth Trans-Tasman Composer Residency Exchange.

Colin Bright is also a performer and improviser. It was his early experiments in improvisation and open-form structures that lead him to more formal composition.

The Colin Bright Syzygy Band (violin, bass clarinet, trombone, piano, percussion) has the aim of exploring 'Art Music' through indeterminacy in notation, improvisation, acoustic instruments and, especially, electronics & sampling. The pieces have 'structure' as in a composition, with core musical ideas suggested for development through improvisation. The player has the freedom to choose some of these ideas, develop their own ideas, or to go beyond... Thus, a piece will be recognisable through its structure (& samples) although the rendering of the musical material will vary considerably from one performance to another.

Kit: The sinking of the rainbow warrior : teacher resource kit / research and questions by Anne Power.

- Article: Aboriginal Influences in a Hymn for the Republic