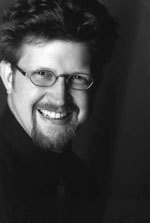 Iain Grandage composes, conducts and performs. He has received the prestigious Sidney Myer Performing Arts Award, and the Ian Potter Emerging Composer Fellowship, and been composer-in-residence with the Western Australian Symphony Orchestra, and musician-in-residence at the UWA School of Music, where he is currently an Honorary Research Fellow.

Iain's concert works have been performed by the Australian Chamber Orchestra, the Brodsky Quartet, the Australian String Quartet, Australian Brass Quintet, Jean-Yves Thibaudet, Sara Macliver, Craig Ogden and choirs and orchestras around Australia. Recent highlights include the Victorian Opera production, in 2014, of his opera The Riders, based on the Tim Winton novel with libretto by Alison Croggon. The Riders was described by Michael Shmith (The Age ), as '…an opera of rare dramatic power, utmost musicality and first-rate performances' and by Peter Burch (The Australian) '.. a bewitching jewel of contemporary music theatre'. Peter Rose of the Australian Book Review wrote, 'The real star of the night was Grandage's radiant new score'.

For the ANZAC Centenary, Iain conducted the Adelaide Symphony Orchestra in the critically and publically acclaimed world premiere performance of his oratorio Towards First Light, written with Kate Mulvany. 'Grandage shows us intimacy, vulnerability, inspiration, comfort and desolation in this exceptional piece', wrote Gordon Forrester (Limelight), while Graeme Strahle (The Australian) wrote: 'this was a memorable world premiere of a major new Australian work. Grandage conducted a polished Adelaide Symphony Orchestra with tremendous flair and energy.'

His compositions for the theatre include Helpmann Award-winning scores for Cloudstreet, The Secret River, When Time Stops and (in collaboration with Kate Miller-Heidke) The Rabbits, and the and Green Room Award-winning scores for The Riders, Lawn, In the Next Room, Babes in the Wood, The Odyssey and The Blue Room for theatre companies including Belvoir, Black Swan, Malthouse, MTC and STC.

As music director, he has won Helpmann Awards for his work with Meow Meow on the Malthouse/Sydney Festival production Little Match Girl, and with the cast on Sydney Theatre Company's The Secret River. He won Green Room Awards for his work with ANAM and Meow on Wunderschon, and with Meow and Malthouse on Vamp. He has conducted orchestras for Gurrumul and Tim Minchin and led a revival of Shane Warne The Musical for the 2013 Adelaide Cabaret Festival.