One of Australia's most esteemed conductors and administrators, British-born John Hopkins OBE AM (19 July 1927 - 30 September 2013) trained as a cellist with Haydn Rogerson at the Royal Manchester College of Music, then studied conducting with Joseph Lewis at the Guildhall School, London, and with Carlo Zecchi at the Mozarteum in Salzburg. He became assistant conductor of the BBC Scottish Orchestra at a young age in 1949, then conductor of the BBC Northern Orchestra in 1952.

Hopkins moved to New Zealand in 1957 where he lead the National Orchestra of New Zealand (later NZSO) as well as the New Zealand Opera Company, and founded the New Zealand National Youth Orchestra. In 1963 he moved to Australia where he soon became recognised as an innovator. As Federal Director of Music for the ABC - a leadership position responsible for the activities of all the then ABC orchestras - he oversaw the most vibrant and prolific period in terms of performances of Australian music new and old. Hopkins initiated a concert series featuring avant-garde works by international composers as well as actively championing the work of Australian artists Peter Sculthorpe, Nigel Butterley and Richard Meale. He held the post until 1973.

Hopkins conducted the Melbourne and Sydney Symphony Orchestras, and completed numerous overseas tours to conduct orchestras from Belgium, Holland, Sweden, Yugoslavia, Czechoslovakia, the USSR, Canada, the USA, South Africa and Japan. Other career highs included becoming the founding Dean of the College of Music at the Victorian College of the Arts, and enjoying a six-year tenure as Director of Sydney Conservatorium of Music. John Hopkins was Convenor of Conducting and an Honorary Professorial Fellow in the School of Music at the University of Melbourne. He was awarded the APRA/AMC Award for Distinguished Services to Australian Music in 2011.

Hopkins published his memoirs, The point of the baton (written in collaboration with William Cottam), in 2009.

Articles by and about John Hopkins

John Hopkins once told me no one would ever understand or believe the experience we had there – the intense danger in the South African townships, the vast beauty of the old land, the African immersion into Western music through centuries of Christian missionaries, the Messiah sung in Zulu. We worked eighty-hour weeks taking the Natal Philharmonic Orchestra where it had never been, to the Townships of KwaZulu Natal, to more than 100,000 people in eight months, who had not heard an orchestra under the rule of apartheid...

The Australasian Performing Right Association (APRA) and the Australian Music Centre (AMC) are delighted to release names of the recipients of the Award for Distinguished Services to Australian Music. In 2011, this award will be shared between two outstanding and inspiring members of the Australian music community, conductors John Hopkins OBE and Patrick Thomas MBE. The recipients of this Award were determined by the Board of Directors of APRA and the AMC.

The awards ceremony will be held at Sydney Theatre, Walsh Bay next Tuesday, 3 May 2011.

The gala event held at the Sydney Theatre, Walsh Bay on Tuesday 3rd May 2011 honoured winners across nine national categories and seven State Awards, spanning performance, composition, outstanding contributions to Australian music by individuals and organisations, music education and regional music. An additional Award for Distinguished Services to Australian Music, as determined by the Board of Directors of APRA and the AMC, was also presented.

Music for Japan by Peter Sculthorpe

Crisis : thoughts in a city by Barry Conyngham

Book: The point of the baton : memoir of a conductor / John Hopkins, with William Cottam.

World premieres given by John Hopkins

Cloudlines : concerto for harp and orchestra by Barry Conyngham— Feb 91

The Singing Continent, op. 81 : a festival divertimento based on traditional Australian melodies, for orchestra by Paul Paviour— 9 May 88 (Great Hall, Parliament House, Canberra)

The Song of Tailitnama : for voice, six cellos and percussion by Peter Sculthorpe— 6 May 74

Music for Japan : for orchestra by Peter Sculthorpe— 25 May 70 (Melbourne Town Hall)

Sun music I : for orchestra by Peter Sculthorpe— 30 Sep 65 (Royal Festival Hall, London, as part of the Commonwealth Arts Festival.) 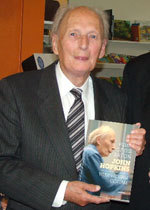