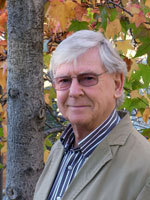 Don Kay's musical language has its roots in the tradition of Western art music but has been significantly shaped by his experience of Tasmania's environment and history.

Kay identifies Hastings Bay (1986) as the first mature piece that was a direct, conscious response to a specific personal experience of a specific place, acknowledged by the title. Two works, amongst a number important to him for reflecting this influence, are: Tasmania Symphony - the Legend of Moinee for cello and orchestra (1988), and Piano Trio, The Edge of Remoteness (1996).

Kay is aware that his response to Tasmania's natural world has developed an individualised, personal language which, liberated from literal and metaphorical connections, now permeates his abstract work. Piano Sonatas 6, 7, 8, 9, 10, 11 & 12 (2009-2021): Intermezzo for Frances, Extraordinary Byways (both piano): Memento Mori, 5 operatic scenes for male and female solo voices and piano trio (2018); Symphony 4 (2017), Concerto for Trumpet with Winds and Percussion (2018) and Conflagration, the Tasmanian bushfires, Summer, 2018-19, for SATB soloists, chorus, two pianos and six percussionists, with text by John Honey (2019) are among his more recent works.

Don Kay was born on January 25th 1933 in Smithton, Tasmania. He was educated at Smithton Primary School, Launceston Church Grammar School and the University of Melbourne where he gained his music degree. He studied composition privately in London with Malcolm Williamson (1959-1964).

Since returning to Hobart in 1964 he has composed much music for professional individuals, ensembles, young performers, amateur groups, theatre, concert and public occasions. His compositions include two one-act operas, a major two-act opera (The Bushranger's Lover), seven concertos, four symphonies, vocal, choral and chamber music, including six string quartets. His works have been performed Australia-wide and internationally.

Works to have received special awards include: The Golden Crane (a one-act opera for young people's theatre with libretto by Gwen Harwood); Tasmania Symphony - the Legend of Moinee (for cello and orchestra); and Dance Concertante (for string orchestra).

In 1990 Don Kay was appointed a Member of the General Division of the Order of Australia for his service to the Arts, particularly in the field of composition. In 2003 he was awarded a Centenary Medal for an outstanding contribution to music, music education and composing in Tasmania. In 2010 he was awarded the Clive Lord Memorial Medal by the Royal Society of Tasmania.

Kay retired from the staff of the Tasmanian Conservatorium of Music in 1998 having served as Head of Department from 1990 to 1993. He now composes full-time, but has maintained his association with the Conservatorium as an adjunct professor, and continues to be involved in teaching composition on a casual basis.

A playlist of Kay's compositions is available to view on YouTube at https://www.youtube.com/playlist?list=PLa8PUTJBYOu874_n9I-0T_cQINBv1H_9h