Genevieve Lacey is a recorder virtuoso who performs music spanning ten centuries. She works in contexts as diverse as her medieval duo with Danish pipe and tabor player Poul Høxbro, guest appearances with the Black Arm Band, who present music of the Australian indigenous experience, and her role in Barrie Kosky's production of Liza Lim's opera 'The Navigator'.

Her new work en masse, created with London filmmaker Marc Silver, has been commissioned and premiered by the Adelaide Festival 2010, and will go on to tour Australia and abroad. Genevieve has recently been commissioned by Scott Rankin and Big hART to create the music for 'Namatjira', a co-production with Company B Belvoir. As artistic director, Genevieve will direct the 2010 and 2012 Four Winds Festivals.

As a concerto soloist, Genevieve has appeared with the Australian Chamber Orchestra, Australian Brandenburg Orchestra, Academy of Ancient Music, English Concert, St Petersburg Chamber Orchestra, Malaysian Philharmonic Orchestra and the Melbourne, West Australian, Tasmanian and Queensland Symphony Orchestras. She has a substantial recording history with ABC Classics, and her newest album, weaver of fictions, was released in 2008.

An active member of the Australian arts community, Genevieve sits on the Astra, Elision and Australian Music Centre boards. She had a three-year position as artistic director of the Melbourne Autumn Music Festival and has been a member of the Musica Viva Artistic Review Panel as well as judging panels for the Ian Potter Music Commissions and Sidney Myer Performing Arts Award. Genevieve is a guest curator for the 3MBS FM inaugural Musical Portraits live-to-air concert series in 2009.

Genevieve holds academic and performance degrees (including a doctorate) in music and English literature from the University of Melbourne (Australia), the Schola Cantorum Basiliensis (Switzerland) and the Carl Nielsen Academy of Music (Denmark). She is a Fellow of the Faculty of Music, University of Melbourne and in 2009 was artist in residence at the Victorian College of the Arts. Her work has won her multiple awards including an ARIA (Australian Recording Industry Award, Best Classical Recording), Freedman Fellowship, Churchill Fellowship, Best Performance (Australian Classical Music Awards) and Outstanding Musician (Melbourne Prize for Music).

Articles by and about Genevieve Lacey

The idea of ‘performance practice’ means wildly different things to different people. I frequently play music from centuries past, where long-dead composers are scant help with interpretative questions...

Kaidan, a work by Ian Cleworth, Timothy Constable, Riley Lee, and members of TaikOz was awarded Best New Composition at the 2007 Limelight awards on 14th November...

Morwenna Collett caught up with Genevieve Lacey in July, while the recorder virtuoso was in Brisbane for Liza Lim’s opera The Navigator. The opera was performed by the ELISION ensemble under the direction of Barrie Kosky, as part of the Brisbane Festival.

19 Dec 2007 Recorder Gets A Workout by Melissa Lesnie

Do people still cling to the limited perception of the recorder as infantile and defunct? Or have they moved past its longstanding reputation as amplified ammunition for toddler tantrums or as a relic of chillout music for Henry VIII? Australia’s concertgoers have much to assure them of the instrument’s vitality in early music and contemporary composition alike...

The gala event held at the Sydney Theatre, Walsh Bay on Tuesday 3rd May 2011 honoured winners across nine national categories and seven State Awards, spanning performance, composition, outstanding contributions to Australian music by individuals and organisations, music education and regional music. An additional Award for Distinguished Services to Australian Music, as determined by the Board of Directors of APRA and the AMC, was also presented.

The New Music Network's annual Peggy Glanville-Hicks Address 2013 will be presented by the recorder virtuoso Genevieve Lacey on 25 November (in Sydney) and 27 November (in Melbourne).

Recorder virtuoso Genevieve Lacey's Peggy Glanville-Hicks Address, presented in Sydney and Melbourne on 25 and 27 November, is now available online in its entirety on the New Music Network website. In her speech, entitled 'Learning to Listen', Lacey paid tribute to Peggy Glanville-Hicks, whose centenary was celebrated on 29 December 2012.

'She's an inspiring role model for me, a woman born a couple of generations later, still grappling with similar questions: in essence, how to mold a life around a love for music...

'We in this room have the collective capacity to imagine identity: Australian music and musicians have a huge part to play in shaping who we are as a nation.' Read in full the speech given by the Chair of the AMC Board, Genevieve Lacey, at the Art Music Awards ceremony in Melbourne on Tuesday 16 August 2016.

Where is everybody? by Andrea Keller

I Surrender by Andrea Keller

I Surrender by Andrea Keller

World premieres given by Genevieve Lacey 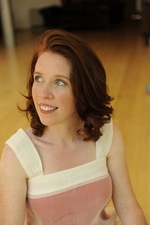