'My music contains a tilt towards Europe, values idiosyncrasy over ideology and wit rather than obscurity.' 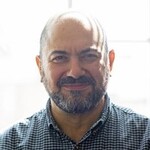 Raffæle Marcellino (b. 1964) is a composer whose music has been performed by many of the leading Australian ensembles, including OzOpera, The Song Company, The Seymour Group, Synergy, Sydney Alpha Ensemble, Continuum Saxophone Quartet and all the major symphony orchestras.

Premieres include L'arte di volare performed by the Tasmania Symphony Orchestra; The Art of Perception performed by the Australia Ensemble at the International Music and Psychology Conference, Sydney; The Flight of Les Darcy, an opera that premiered in 2001 at the 10 Days on the Island Festival, Hobart Tasmania; The Art of Memory performed by Marina Phillips and the Australian Brandenburg Orchestra at the City Recital Hall, Sydney, Psalm Davids for the Sydney Philharmonia Choir, O Antiphons for the Song Company, Mrs Macquarie's Cello for ABC Radio National and Dawn Desiderata for the Sydney Festival.

In October 2004 his opera Midnite was premiered at the Melbourne International Festival of the Arts by OzOpera, with libretto by Doug MacLeod and conducted by Richard Gill.

for the Melbourne Festival, Raffaele was Head of the Tasmanian Conservatorium of Music University of Tasmania 1996-8 and was Dean of the Australian Institute of Music from 2003-2009. In 2010 he became Foundation Dean of the Australian College of the Arts (Collarts). Collarts joined with Macleay College, a private tertiary education provider in music performance, production, music business, journalism, advertising and business, with students in Sydney and Melbourne. In March 2013 he became Director of Academic and Student Services for SAE Qantm Creative Media Institute, a division of Navitas. In April 2015 Raffaele relocated to Oxford to take up the global role of Chief Academic Officer for SAE Institute.

Raffaele was appointed Provost for the newly organised Navitas Careers and Industry Division relocating to Sydney in 2017 and Executive General Manager, Learning and Teaching in 2019.

Marcellino says of his music: 'My music contains a tilt towards Europe, values idiosyncrasy over ideology and wit rather than obscurity'.

- Video: Raffaele Marcellino on composition - In conversation with...

- Video: Raffaele Marcellino on being an Australian composer - In conversation with

- Video: Raffaele Marcellino on new music - In conversation with...

- Video: Raffaele Marcellino on A strange kind of paradise - In conversation with...

- Video: A strange kind of paradise (Movements I and II), by Raffaele Marcellino