Music is innate to the human condition, so making something that can resonate so deeply with the internal that also has artistic impetus is one of my continual ambitions. 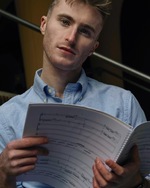 Drawing on nature, important causes and the personal as potential compositional frameworks, Robert McIntyre b.1998 (he/him) is an Australian Naarm/Melbourne-based composer and flautist whose music creates an atmosphere of discussion and reflection. Robert holds a BH-MUS(Honours) in Music Composition with First Class Honours (H1) from the University of Melbourne (MCM), having learnt under Stuart Greenbaum in his honours and under Katy Abbott, Elliott Gyger, Miriama Young, Caerwen Martin and Melody Eötvös across his studies.

Robert is also a 2022/23 University of Melbourne Wattle Fellow and will compose a sustainability-based action project based on Sharma v Minister for the Environment [2021] FCA 560 to be performed by Amelia Jones and Solstice Trio with commissioned text by regular collaborator Savanna Wegman.

His music is performed and recorded in Australia and so far internationally in EU, CAN and US. It has been brought to life through by many household names such as the Australian Youth Orchestra, Syzygy Ensemble, Collide Trio, Trio Immersio, Melbourne Saxophone, the University of Melbourne Symphony Orchestra and more.

He was commissioned by Divisi Chamber Singers for the inaugural Composer Queer Initiative, which additionally led his work Syrup and Silicone (2020), with text by Savanna Wegman, to be recorded on their 2022 debut album Spectrum, which is Australia's first-ever fully-Queer/LGBTQIA+ classical music album.

Robert's piano trio See through me has also placed 2nd in the 2022 Luna Nova Student Composition Contest (US, Tennessee), performed in the Belvedere Chamber Music Festival. Initially, it was composed for Trio Immersio as part of the Vienna/New York-based ICEBERG 2021 New Music Institute.

Other notable programs to date include the 2021 Australian Youth Orchestra National Composition Program writing for Momentum Ensemble under the mentorship of Anne Cawrse, and 2022 Composing in the Wilderness writing for Corvus Ensemble (US, Alaska).

Robert is influenced by classical-contemporary music, post-minimalism, classical-crossover and film/soundtrack music. He is inspired by the likes of Abbott, Cawrse, Greenbaum and Martin, as well as Thomas Newman, John Adams, Olafür Arnalds, and Joe Hisaishi to name a few. Robert is also published in Take Note: Interviews with Australian Composers, edited by musicologist Madeline Roycroft, for his co-interview Stuart Greenbaum. He has interned with Syzygy Ensemble and is working with Abbott in digital-content marketing. In 2021 he commenced postgraduate study at the Melbourne Law School (Juris Doctor) and aspires to undertake a composition masters further on.