My recent vocal works hinge on a fascination with languages and the ways they work - phonetically, syntactically, semantically, dramatically. In writing music (whether vocal or instrumental) I seek to address the same concerns under different labels. 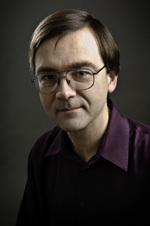 Elliott Gyger was born in Sydney, Australia, in 1968, and began writing music at about the age of ten. His composition teachers have included Ross Edwards, Peter Sculthorpe, Bernard Rands and Mario Davidovsky. He holds a Bachelor of Music from the University of Sydney (1990) and a PhD in Music from Harvard University (2002). His awards have included the Peggy Glanville-Hicks Fellowship, the Walter Hinrichsen Award from the American Academy of Arts and Letters, and commission grants from the Australia Council and the Fromm Foundation.

Elliott Gyger's music essays a synthesis of some of the bewildering diversity within Western art music of the late 20th and early 21st century. Grounded in the structural rigour of high modernism, it is concerned with the nexus between harmony and instrumental/vocal gesture. His instrumental works typically explore dramatic interactions between soloists and groups, whether in an orchestral or chamber context. His substantial vocal and choral output is similarly multilayered, with many pieces setting texts in multiple languages.

Recent works include the celesta concerto Angels and Insects (2010); an hour-long solo piano work inspired by Dante, Inferno (2013), for Michael Kieran Harvey; and a tenor saxophone concerto entitled Smoke and Mirrors (2014), premiered in December 2014 by soloist Joshua Hyde with the Thailand Philharmonic Orchestra. His 'dialogue for orchestra' on air (2011) was awarded the Sydney Symphony 80th Anniversary Composition Prize, receiving its first performances with the SSO under Vladimir Ashkenazy in March 2012. giving voice (2012), for mezzo-soprano and five instruments, won the 2013 Paul Lowin Song Cycle Award, and was premiered by Jenny Duck-Chong with Halcyon in July 2014. 2015 saw Sydney Chamber Opera's critically acclaimed seasons of his chamber opera on David Malouf's novel Fly Away Peter, in Sydney and Melbourne; and the premiere of his piano concerto From Joyous Leaves for Zubin Kanga and Arcko Symphonic Ensemble.

Gyger is also active as a conductor, teacher and writer on new music. He was Assistant Professor of Music at Harvard from 2002 to 2007, and has taught at the University of Melbourne since 2008, where he is currently Senior Lecturer in Composition. He has been a tutor for young composer development programs with Halcyon, the Tasmanian Symphony Orchestra, and National Music Camp. He has written extensively on Australian composer Nigel Butterley, including a book on his music published by Wildbird Press in April 2015.

- Video: Elliott Gyger on composition - In conversation with...

- Video: Elliott Gyger on Giving Voice: Working with text - In conversation with...

- Video: Elliott Gyger on Giving Voice: Ensembles - In Conversation With...

- Video: Elliott Gyger on Vocal Chamber Music - In Conversation With...

- Video: Elliott Gyger on Setting Text - In Conversation With...