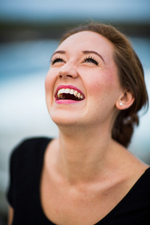 Sydney based Ella Macens is a fast-emerging composer with a passion for choral, orchestral and chamber music writing. Capturing qualities from both popular and classical music styles as well as that of her Latvian herritage, Ella's music is becoming well-known in Australia and beyond.

Ella has completed a Bachelor of Music (Composition) with first class honours at the Sydney Conservatorium of Music, The University of Sydney, and is currently studying a Master of Music (Composition) under the guidance of Professor Matthew Hindson AM. As one of four composers selected to participate in the Sydney Conservatorium of Music's inaugural National Women Composers' Development Program (2016-17), Ella has been fostering connections with some of Australia's most esteemed ensembles and soloists through the creation of a series of solo, chamber, choral and orchestral works.

Her compositions have won awards, including inclusion in ENCORE (2009), the Frank Hutchens Scholarship for Composition in 2012 and the Fine Music FM Young Composer Award (2017) for her first orchestral piece titled FLIGHT.

The composer's musical voice is heavily influenced by her Latvian heritage. Growing up in a rich and colourful Latvian community has led her to be continuously surrounded by instrumental folk music, baltic choral music and traditional dance. These elements have unsurprisingly woven their way in to Ella's compositional style. In 2017 she received a prestigious award from the World Federation of Free Latvians (PBLA) to honour her dedication to her cultural heritage, specifically through the incorporation of Latvian elements in her professional line of work. Ella further celebrates her cultural background by arranging traditional Latvian folk songs into contemporary music styles with her good friend Ivars Stubis, which they perform together at Latvian festivals and events in Australia.