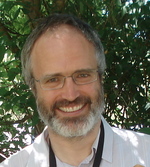 Benjamin Thorn was born in Canberra and studied at the Canberra School of Music and the University of Sydney. He has a PhD in Theatre Semiotics and a DipEd. He is both a composer and a performer, mostly on the recorder.

His compositional output includes a range of instrumental, vocal, choral and music theatre works. He has gained wide acclaim for his works for recorder. In 1986 Pipistrelli gialli was an official Australian submission to the ISCM World Music Days. He edited Recorders at Larg, a two-volume collection of mostly Australian recorder music published by Currency Press, which has received considerable critical acclaim. The voice of the crocodile... (published by Moeck Verlag) was a set work for the International Recorder Competition in Karlsruhe in 1992. In 1991, Missa sine verbum won the 2MBS FM Young Composers Award, and Two diagonals and a squiggle the Fellowship of Australian Composers competition, with The voice of the crocodile... being commended in the same competition. Bell Play was performed in the ISCM World Music Days in Belgium in 2012.

Thorn's music tends to be rhythmically lively and tuneful (though with the odd crunchy bit) and he has been referred to 7/8 Anonymous to cure a marked addiction to that time signature.

He has published a number of articles on music and theatre and has been a guest editor of AMC News vol. 13 (Music for Children) and Sounds Australian vol. 20 (Virtuosity). For several years he was the administrator of the composer collective Music Performed, organising composer workshops. In 1986/87 he prepared and presented a 13-part series Hearing the Dots on 2MBS FM.

He has edited and arranged 17th-century works by Strozzi, Castello and Caccini for recorder for Saraband Music, and a collection of piano music for children by Larry Sitsky for Currency Press. He is currently involved in editing and producing publications for Orpheus Music in Armidale. He is the artistic director of the New England Bach Festival.

Benjamin Thorn has performed as a soloist and with a number of groups around Australia and conducted many workshops for schools and other groups.

Since none of the above activities pay particularly well he has worked as a research person, mainly in the field of education and training and as a TAFE teacher, and currently lectures in music education at the University of New England.

He believes not enough music is inspired by vegetables and crocodiles.