The 2020 Art Music Awards have been celebrated on 8 September in a virtual ceremony fit for a creative nation, with winning artists and organisations spanning the country from East to West, and from Tasmania to the Northern Territory. 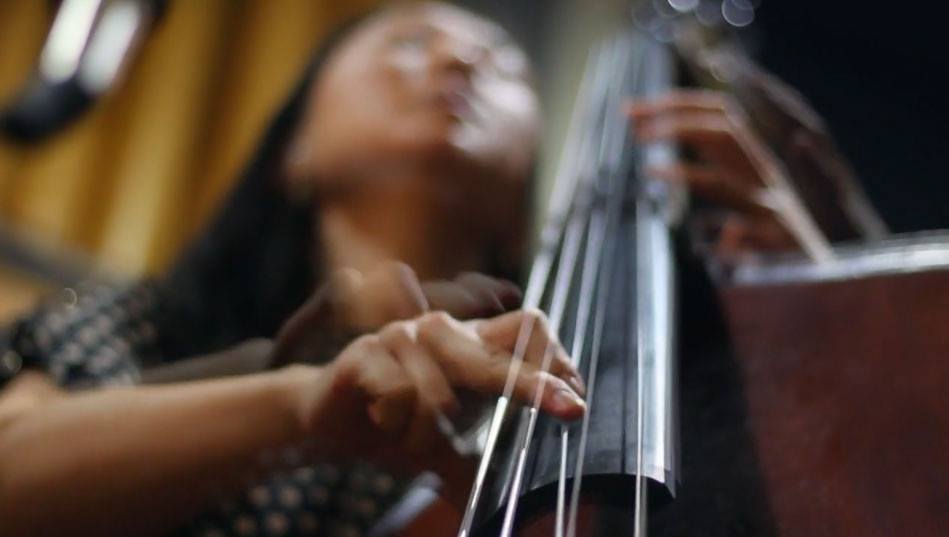 Work of the Year: Jazz winner Linda May Han Oh performing
as part of the Virtual Art Music Awards

The 2020 Awards included several new and restructured categories, in tune with the constantly evolving art music landscape. As a reflection of this, the winners' list in this year of the pandemic is arguably the most vibrant and forward-looking in the history of these Awards. This is a fitting result for the 10th birthday year of the Art Music Awards - though the history of the Awards goes further back, with the Classical Music Awards, and before that the Sounds Australian Awards, first organised in 1988.

The performance program of the virtual event showcased the talents of two of this year's winners from Western Australia: percussionist Louise Devenish (Performance of the Year: Notated Music; and Luminary Award: Western Australia) and bassist and composer Linda May Han Oh (Work of the Year: Jazz), whose virtuosic performances left little room for doubt as to the accuracy of the judging panels' deliberations. We also heard finalists Robin Fox & Erkki Veltheim, and, as the finale of the program curated by Barney McAll, a performance featuring poetry slam champion Melanie Munuggurr-Williams and producer Beatrice Lewis.

The inaugural national Luminary Award for an Individual, for sustained contribution over several years, was presented to Dharug composer Chris Sainsbury for initiating and driving the Ngarra-Burria: First Nations Composers program, a critically important project. According to the judging panel: 'Chris' work over the past five years has had a national impact in both training emerging First Nations composers and redefining their role and future within Australian art music'. 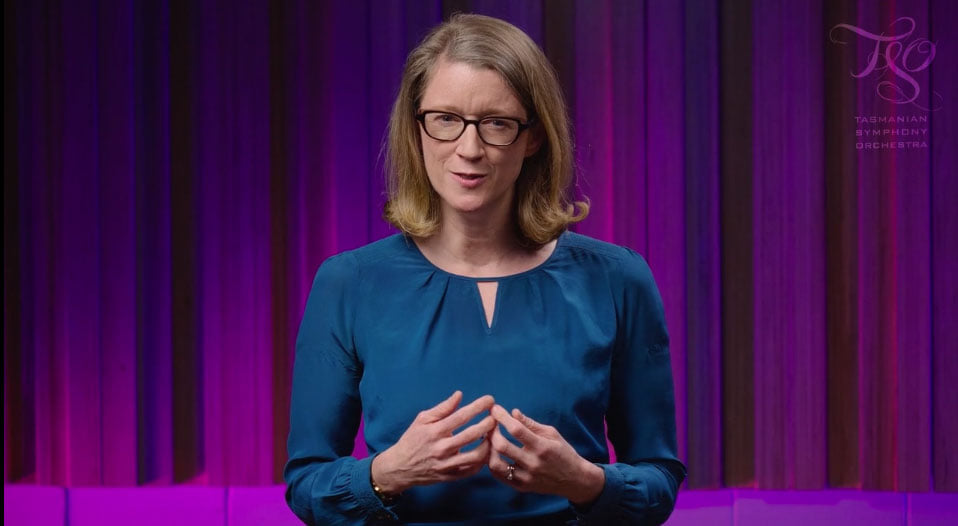 CEO Caroline Sharpen accepted the inaugural National Luminary Award
for an Organisation on behalf of the Tasmanian Symphony Orchestra.

The Tasmanian Symphony Orchestra was the recipient for the Luminary Award for an Organisation, for long-term commitment offering professional development for Australian composers and musicians, as well as promoting gender equity through opportunities for female conductors. The TSO's support of Australian music was also evident in this year's finalists list.

The Performance of the Year Awards - for the first time presented in two categories - were a show of strength by women in particular. Louise Devenish won the Notated Music category with her percussion program 'Sheets of Sound'; while Sandy Evans's Bridge of Dreams team (Evans, Shubha Mudgal, Aneesh Pradhan and Sirens Big Band) took home the inaugural Performance of the Year: Jazz/Improvised Music Award.

The new Work of the Year: Dramatic category made Awards history in having two winners. The judging panel unanimously agreed to award two very different but equally outstanding operatic works: Elliott Gyger and Pierce Wilcox's Oscar and Lucinda, based on Peter Carey's novel; and Cat Hope's Speechless - a wordless opera with a graphic notation score generated from the 2014 Human Rights Commission Report about children in immigration detention. 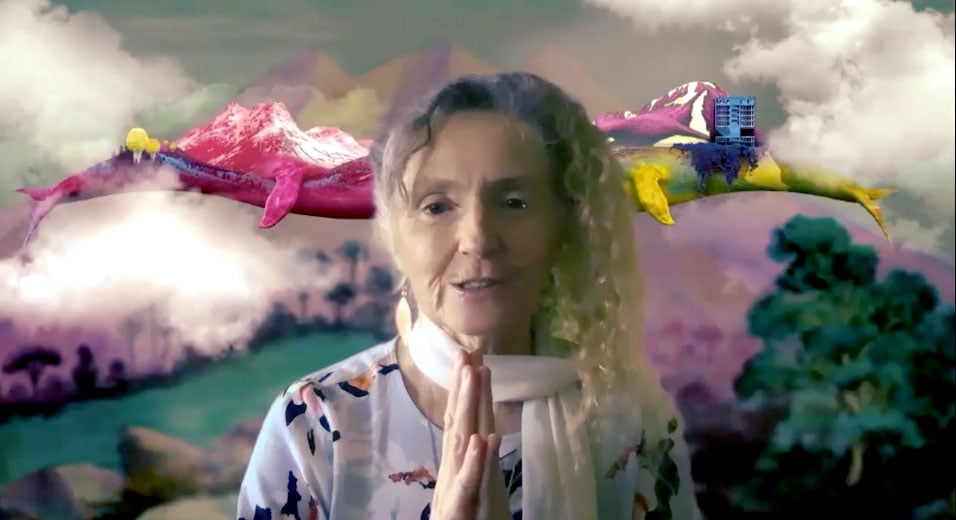 Bassist and composer Linda May Han Oh continued Western Australia's strong performance by taking home the Art Music Award for Work of the Year: Jazz for her Aventurine - 'a pinnacle of what jazz can be in Australia today' according to the judging panel.

The new Award for Work of the Year: Electroacoustic/Sound Art went to the Melbourne-based Matthias Schack-Arnott's Everywhen, praised by the panel as 'stunning in conception and in execution'.

In the new Work of the Year: Choral category Paul Stanhope's work to Steve Hawke's text, I am Martuwarra, was acknowledged as 'a texturally varied and interesting work that harnesses the richness of the multi-layered choral forces to great effect'. Commissioned by Gondwana Choirs, the work's title refers to the Fitzroy River in the Kimberley Region.

James Ledger's Viola Concerto won the Award for Work of the Year: Large Ensemble, the judges calling it 'a highly sophisticated work with its innovative harmonic language and beautiful synergy between all its elements'. The Work of the Year: Chamber Music went to Chris Dench's extensive solo piano composition passing bells:day,'an extraordinary contribution to the repertoire'. 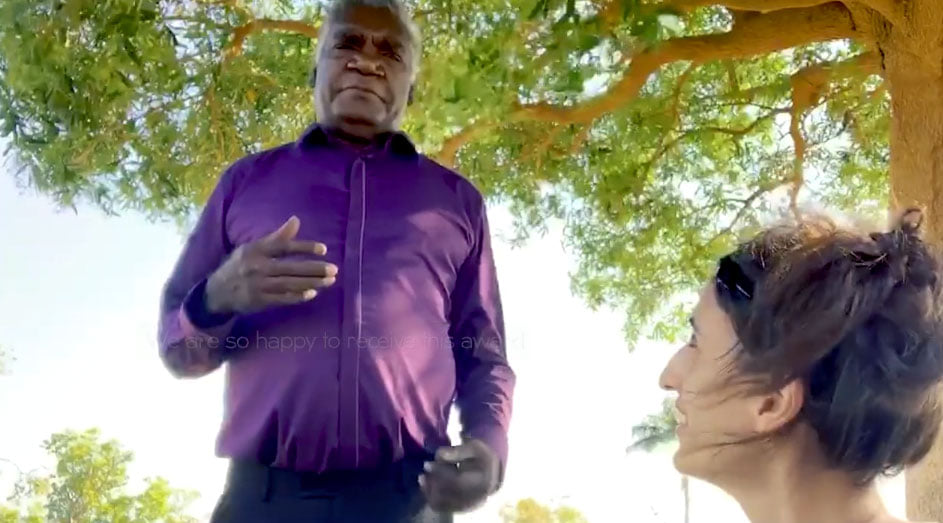 The Award for Excellence in Music Education went to Netanela Mizrahi and Guwanbal Gurruwiwi for the Djari Project. A finalist in two categories this year, the project is a compositional collaboration drawing on the traditional knowledge and songlines from the Galpu community of Galiwinku/Elcho Island, bringing together composers, musicians, music educators and students throughout the Northern Territory.

The Award for Excellence in Experimental Music was presented to the Music Box Project for 'Shallow Listening', a concert experience which combined new compositions by emerging composers with a pioneering Australian work by Moya Henderson. The panel praised the Music Box Project's ability to facilitate, curate and perform experimental music at the highest level.

The Award for Excellence in a Regional Area went to Gillian Howell and Tura New Music for the Fitzroy Valley New Music Project, a third and final year of residencies developing music projects through community collaboration and open exchange of ideas.

Composer and sound artist, Dr Ros Bandt formally accepted her Richard Gill Award for Distinguished Services to Australian Music, presented at the ceremony by Dr. Leah Barclay. Read more about this Award, announced prior to the ceremony on 27 August.

The Art Music Awards were co-hosted by Jonathan Biggins, Dr Lou Bennett AM and Zela Margossian.

APRA AMCOS and the AMC congratulate all the 2020 Art Music Awards winners on their outstanding achievements.

Work of the Year: Choral

Work of the Year: Chamber Music

Work of the Year: Large Ensemble

Work of the Year: Electroacoustic/Sound Art

Work of the Year: Dramatic

Work of the Year: Jazz

Performance of the Year: Notated Composition

Performance of the Year: Jazz/Improvised Music

Queensland: Katie Noonan for The Glad Tomorrow and furthering the future of Queensland musicians 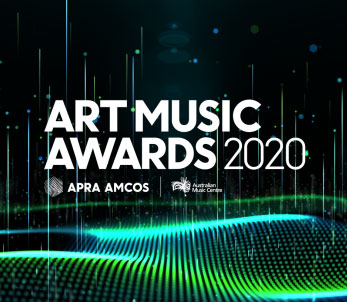