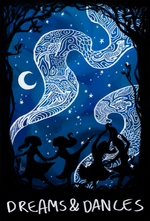 What happens when Vox, Sydney’s sassiest and smartest group of young choristers meets Halcyon, acclaimed champions of new music for voice? The result is a musical feast of recently composed works from around the world, including some beautiful gems by our own Australian composers.

Further information for this event is available online at the event's website or by phone on (02) 8256 2222 or by email to info@halcyon.org.au

An amazing night of vocal firsts

You knew this was going to be a different concert because there were lots of young people in the audience! The usual people were there in attendance at a Halcyon concert including composers Ross Edwards, Nigel Butterley and Moya Henderson, the AMC's John Davis, the many familiar faces you see at new music events - people you only know to smile at.

To the important part of the night, which was of course the music! I got my first tingles upon hearing the beautiful harmonies of Arvo Pärt's "Bogoroditse Djevo". The soloists in Katy Abbott's delicious "Aspects of Dreaming" led us through such beautiful melodic lines, some in close harmony, other perfect unison. It was so so fantastic to hear such unstrained, clear, fresh singing. While I very much enjoyed Eliot Gyger's work, I thought the positioning of the soloists broke the connection with the choir, putting a distance between soloists & choir that for me, interfered with the balance of this piece. We were fortunate to be introduced to the beautiful Vidales 'Four Basho Haiku' for voice & vibraphone - what a rare piece! From the moment Dan Walker's 'Litany of Earth' began, the pulsating ostinati on the marimba, combined with the choral writing in this exciting rhythmic work had you captivated! Kerry Andrew's work for solo mezzo & choir was just sublime! With Jenny on stage & the choir positioned all around the auditorium, the sound was very effective. Oh yes! 2nd tingles of the night! O nata lux was soooo delicious! Piece of the night to that point!

I love to watch Clare Edwards work & Gerard Brophy's work 'Coil' certainly gave us an opportunity to hear her more of her talents this evening. I was there the evening Clare performed & won the Young Performers Award in 1999, so it's really exciting to have watched her career unfold all these years.

Saariaho's extremely challenging work, 'Nuits, Adieux' was such a great way for young voices to cut their teeth learning and exploring a range of vocal and textual techniques, testing and honing their aural skills as well as performance and ensemble abilities with the soloists, who just shone in this work. How appropriate to was to finish the evening's concert with Ross Edward's 'Mantras and Alleluyas' performed with Alison and Jenny performing from memory within the Vox choir. The first gentle contemplation was serene, taking you to another place, with the final Alleluya being a fitting celebration to end the concert. The percussion accompaniment in this piece, as with many of the works, added a dimension you rarely hear with choral works. As always, Halcyon's programming for this evening's concert brought together a wealth of vocal and choral chamber (new art) music rarely heard. What a treat for those audience members there. I can't wait to hear the 'Music for 18 Musicians' (Steve Reich) this coming Sunday at the Opera House.