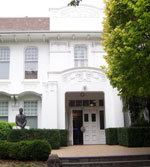 Legendary Australian composer Peter Sculthorpe dedicated his last major composition to the Brown and Breen Piano Duo just before his death in 2014. "Island Songs", written for two pianos and didgeridoo, is based on traditional indigenous songs from the Thursday Island region.

The Brown and Breen Piano Duo are honoured to present "Island Songs" for its Australian premier at the Sydney Opera House as the centre-piece of a rare all-Australian program. Bursting with the quintessential colours, energy and excitement for which Australian music is known the world over, this virtuosic programme also features works by Nigel Westlake, Ross Edwards, Percy Grainger, Elena Kat-Chernin and Miriam Hyde.

Peter Sculthorpe, one of Australia’s most eminent composers, had not previously created a two piano work in a long career that had produced over 350 works. Peter readily agreed to the opportunity and delivered the work, “Island Songs”, two years later. It was recorded at the ABC Iwaki auditorium in Melbourne in late 2013 and the world premiere was given in France in late 2014.

The Brown and Breen Piano Duo formed in 2011. Concert pianist Bonnie Brown, based in Paris France, and Louisa Breen, concert and orchestral pianist with Melbourne Symphony Orchestra, are deeply committed to the creation of new Australian music. The duo now regularly commission Australia’s leading composers to create new works for two pianos and piano duet. The duo recently completed a highly-successful concert tour of France in December of 2014 and after their Australian tour in August 2015 Brown and Breen will undertake their first extensive concert tour of the United States in September and October. They will release their first commercially available recording in 2016.