With more than a dozen CDs to her name, Jeanell Carrigan's dedication to recording the works of our contemporary composers is impressive. In 2012, the AMC will have the pleasure of releasing two new CDs by her: Narratives and Detours, out earlier in 2012, and A Little Variation, scheduled for release towards the end of the year. Below, Carrigan talks with Anni Heino about these two titles and her ongoing project of recording as much Australian music as possible.

You can join us for a special CD launch event on 5 October at 5pm a The Kings School Parramatta (entry via Russell St) - this is a unique opportunity to hear live a selection of movements from Narratives and Detours, performed by Carrigan. The launch, followed by a reception, will be held alongside the Music Teachers Association Conference - to reserve your place please phone the AMC by 1 October on (02) 9247 4677 or email .

> Listen to samples and purchase the CD through the AMC Shop. 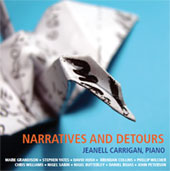 Jeanell Carrigan is a professional pianist whose busy schedule includes recitals and chamber performances for Musica Viva, and broadcasts for the ABC. With teaching experience at all levels, from primary to tertiary, including positions at the Hochschulen für Musik in Stuttgart and Munich, the Universities of Queensland and Melbourne, and the Queensland and Sydney Conservatoriums, she is constantly in demand as an examiner and adjudicator for competitions and eisteddfods. She is currently lecturer in ensemble studies at the Sydney Conservatorium.

According to Carrigan, Narratives and Detours celebrates the creative diversity that can be found in a place such as Sydney.

Anni Heino: Narratives and Detours, includes music by 10 composers - all Sydney-based and all men. In the CD booklet you talk about the cultural diversity of Sydney, and the diversity of styles on the CD is indeed impressive, from lush late romantic piano writing to a rather more spiky, modernist idiom. Is it a challenge to embrace such a rich variety of styles and approaches? And how easy or difficult was it to find the right program for the CD?

Jeanell Carrigan: My aim is to be responsible for as much Australian solo piano music being recorded as possible. As there is an awful lot of music to get through I always try to link the music into certain fields. My last CD was a recording of works by female composers, so just as a contrast to that I decided to tackle only male composers. Again there are a lot of great unrecorded works by male composers and so, as a method of definition, I decided to limit this particular CD to those composers who are presently resident in Sydney. Then out of that defined area I deliberately chose works that were of different styles to contrast each other. After the recording was finished, I tried to set works off by again contrasting styles within the CD to get a series that reflected the diversity.

AH: Nigel Butterley's Grevillea, 'imagined in a rocky landscape, on a windy day', as the composer puts it in his program note, seems to have dug its roots in a rather different soil to John Peterson's 'Rainforest at Minnamurra Falls' (from Remembering Illawarra). Neither image is truer than the other of course - but presumably the challenges for the interpreter are different?

JC: Every piece of music has unique challenges. Many of the challenges that I enjoy relate to rhythm and the Peterson set of works is certainly rhythmically challenging, whereas the Butterley piece is difficult because of a lack (on my part) of familiarity with the musical language he uses. It does help though to have a visual image when interpreting, and some pieces lend themselves to this image better than others. Both the Peterson and the Butterley create - I think - a strong visual image.

AH: None of the works chosen claim to be specifically about Sydney, but many of them do seem to convey a sense of place, or an atmosphere, and several works have programmatic titles - such as the works discussed above. Is this aspect of the CD intentional?

JC: Not really. I had always wanted to record the piece by Nigel Butterley and it fitted in very well with my theme. I feel the diversity of styles within Sydney comes from cultural backgrounds and musical ancestry, rather than landscape and its elements.

AH: Do you 'outgrow' the program when you perform these works or does it stay with you while you play the works for the 2nd, 3rd or the 30th time?

JC: As I am always jumping to new projects the pieces usually only stay with me while I am involved in that particular recording. I enjoy the works, live with them for a while, and then move on. There are just so many great pieces I want to record!

AH: Your next project with the AMC is about works written in the form of theme and variations - all premiere recordings of compositions written from 1970s to 2000s. Can you give us a little insight into what we can expect?

JC: I'm in the middle of preparation now and must say I am really enjoying this project. I have chosen seven works which are the compositions of six (again sorry!) male composers. Again I feel that I have tried to present different aspects of the variation process. Some composers have developed standard variations on a traditional theme or a theme of their own composition and others have been very adventurous in developing quite eccentric forms of variation. They are all great compositions for the piano and again the aspect of diversity of styles is the reason I have chosen these particular works. The first recording session is next Monday (27 August) and then we'll go from there.

AH: The 'A Little Variation' CD will be your 15th record of Australian piano music. It doesn't seem far-fetched to say that exploring Australian repertoire is your calling. Where do you think it will take you next?

JC: Exploring the way Australian composers have dealt with traditional forms has been quite exciting and I think I may travel along that road for a while. There are for example many sonatas, toccatas and suites. Many of these sit on the shelf unrecorded and unknown. I think I may get them off the shelf and into a recorded existence! Obviously I play a lot of music - not just Australian music - but I am very keen on continuing with this project for as long as possible.

AH: I hesitate to ask about your favourite kind of music - musicians are often reluctant to name names, but I'm always interested to know.

JC: As far as my favourite composer is concerned I have many. I like to play pieces with a strong rhythmic feel - not necessarily jazz but something which is rhythmically challenging and exciting. Harmonically the piece should also have a voice - not necessarily be tonal but a harmonic direction and stability. These pieces - regardless of the composer - are the ones that I would choose.