The Southern Jutland Symphony Orchestra, or Sønderjyllands Symfoniorkester, is a regional orchestra based in the town of Sønderborg in the South of Denmark. The orchestra is by no means shying away from performing and premiering works by contemporary non-Danish composers - in recent years the orchestra has performed works by Erkki-Sven Tüür (Estonia) and Armando Bayolo (USA). In 2013, it was Andrew Schultz's turn, thanks to the orchestra's conductor David Porcelijn who first got to know the Australian composer's music during his time conducting the Adelaide and Tasmanian Symphony Orchestras in Australia. Porcelijn conducted the first European performances of Andrew Schultz's Ghosts of Reason - Symphony No. 2 in Denmark (17 January 2013) and Germany (18 January).

A review of the European premiere by Michael Schäfer in the Klassisk pt magazine stated, 'We, the audience, are spell-bound by this music that takes us on a tour through the desert with whispering wind, through rich and fertile areas with birds flapping their wings, to the coast and the roar of the ocean. Andrew Schultz's music is filled with emotions and unexpected sounds[...] Schultz's music touches the soul and speaks to the mind.' The reviewer met Schultz before the concert for an interview, an edited version of which is reprinted here with permission.

Andrew Schultz: The title refers to the spirit evoked by a room or a place. It is the spontaneous sensation you get when entering a new place that is somehow familiar. From my childhood in Western Victoria, I remember a remote area where I used to play. Years ago, a house had been there, but all that remained were some broken brick walls on bits of the foundation and a grove of wattles. The feeling of being so distant yet close to the previous inhabitants was palpable.

MS: Your compositions Endling and Violin Concerto op. 55 are filled with longing and draw the listener deeply into the mood. At the same time, both works give the impression of something very clear and pure. Do you see yourself as an intellectual person who composes emotional music?

AS: Space, silence and the lack of same, create tension. I write quickly, but I spend a lot of time editing. All that can be removed, is removed; I simplify the music and make it as clear and as honest as possible. And all the time I'm asking myself: can I do this, or do I breach the inner logic of the work?

MS: Has the music failed if it does not evoke emotions?

AS: No, not at all. Composers do not primarily manipulate the emotions of the audience. Evoking emotions in the listeners is not the composer's aim, that's rather a by-product of the music. The clearest artistic expression is the aim, the integrity of the work is paramount. 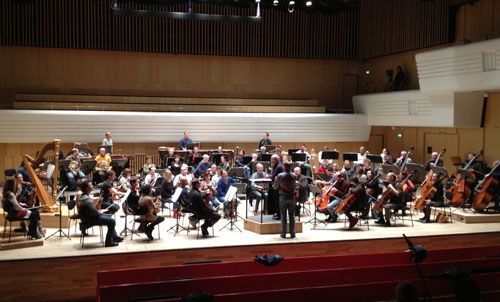 MS: If emotions are a by-product, what then is the actual task of the composer?

AS: To master the technical language of the music in order to create an expressive event that each individual listener experiences personally and 'within'. Remember that there is the potential for an overriding logic created by sounds which cannot be imparted by words. Is music black magic? Definitely not! But it is an art form existing in its own conceptual universe which is difficult to experience through words.

MS: How are you creating the universe of music?

AS: Some composers are interested in sonic objects, all types of sounds, the entire world of sounds, and the way music has developed over time, a kind of investigative development of music in the same way as during the Classical period. Others are working with the expressive dimension of the music, with moods and extramusical ideas, as in the Romantic movement.

MS: Can we look forward to a new masterpiece tonight?

AS: Forget the myth about the unique work of art. The immediate success of a work depends on the interpretation of the experience by the person listening.

MS: In other words, you look at tonight's concert as an experiment: I've written a new piece of music, let's see how it's interpreted by the Danish audience?

AS: Most definitely! I am using sounds that I love myself. Speaking through sounds, and in the absence of words, or where words fail, the brain creates a meaning even though the music itself does not have a specific meaning. I am very curious to find out if we will be evoking a response tonight despite the absence of words in this orchestral work.