I compose music that is uplifting, positive or meditative for peace and harmony on the planet. 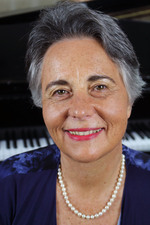 Margaret Brandman's career in music as composer, pianist, music educator, arranger and writer on music education spans more than 45 years. Her compositions receive both live performances and airplay both in Australia and internationally.

Born in 1951 into a musical family, she studied accordion and piano from the age of four, taking up guitar and clarinet in her teens. Her education, supported by formal studies in piano, clarinet, harmony and composition at the Sydney Conservatorium of Music, covered many styles of music.

Brandman was awarded a scholarship to the University of Sydney, where she studied composition with Peter Sculthorpe. In 1975 she was awarded a Bachelor of Music (Composition), having already acquired her Associate Performer degree and Teacher of Pianoforte diploma. She has since also been awarded the F.Comp.ASMC, F.Mus.Ed.ASMC and L.Perf.ASMC degrees by the Australian Society for Musicology and Composition, Hon.FNMSM (UK), and the Dip.E in Piano Pedagogy of the World Piano Teacher's Assocation (Serbia).

Many of Brandman's works are available on three internationally recorded CDs produced by Parma Recordings (USA).

Sensations - Wind, Waves, Birds and Fire (NV6041) containing one hour and nineteen minutes of her celebrated orchestral and chamber works, recorded by the Moravian Philharmonic Orchestra in the Czech Republic, was released in May 2016. The central work on the CD is her dramatic Firestorm Symphony. 'The music ... is a continuous celebration of life, of nature, and hope for a better future. Brandman is not afraid to express herself in a tonal language, which is frankly, today for some Orthodox avant-gardists, a true heresy. The ingredients of this musical palette are persuasive and clear melodic lines, clear and sunny harmonies, a steady rhythmic energy that sometimes draws on syncopated accents of jazz and South American music, an orchestration clear and bright.' (Kathodik Webzine, Italy, July 2016)

Abrazo (AR0001), a compilation album recorded in Cuba, which includes her suite Warm Winds in Havana for saxophone quartet and percussion, was released in June 2016. Margaret was the only Australian composer whose works were selected for the album. 'While the Cuban's fabulous chops make the jazz set-ups... into delicious, occasionally exhilarating treats, ... Margaret Brandman's evocative Warm Winds in Havana for four saxophones and percussion, stand(s) out'. (Gramophone, September 2016)

In September 2016 she premiered 14 newly composed art songs, including The Cosmic Wheel of the Zodiac song cycle together with guest artist Martin Cooke of the Bavarian State Opera company, at a seminal concert at the Conservatorium of Music in Sydney. 'This was delightful! Twelve charming songs with lyrics by Benita Rainer beautifully performed by Martin Cooke and Margaret Brandman.' (Pamela Herring, September 2016). The entire Zodiac song cycle recorded at the concert along with tracks from Sensations, aired in two half-hour programmes hosted by Patrick Thomas, for Fine Music Sydney in April 2017.

Over the years, Margaret Brandman has combined her compositional interests with her interest in accelerated learning techniques for music. She has authored and published a large range of music education materials. Selected awards include WPTA's 'Dip.E in Piano Pedagogy' for her DVD presentation The Geometry of the Piano and the Symmetry of the Hands and World Forum's Distinguished Intellectual Contribution Award for the continent of Australia for her performances and lectures at an international conference in the UK in 2012.

In September 2017, the Prague Mixed Chamber Choir under the direction of Jiri Petrdlik performed and recorded both solo and duet versions of the songs and Margaret's own choral arrangements of the The Cosmic Wheel of the Zodiac song cycle for her album on the Navona Label (NV6160). Margaret travelled to Prague to supervise the recording and attend the concert performance of the entire song cycle on the 14th of September presented in the concert hall of the Czech Music Museum in Prague. The album was released in 2018.

"The current release is a very postmodern one that explores how music's quality can be subtly shaped by changes in the ensemble, namely from solo or duet songs, to choral settings of similar texts. The astropoetry of Benita Rainer serves as the texts for this transversal through the zodiac exploring the unique characters of each astral sign. The album is split into two sections focusing first on the solo song-like versions, and then presenting the choral versions. The pieces tend to be mostly through-composed and explore a variety of harmonic modal and tonal realms. "

"With the solo songs firmly implanted in the listener's ear, the disc shifts into full choral arrangements. The music has a deeper harmonic fullness as one might suspect. Most telling are the closer harmonic clusters that lend the music an almost ethereal quality from time to time and add an extra level of dissonance to the music." CINEMUSICAL review April 2018

The Australian launch concert for the 'Cosmic Wheel of the Zodiac' album took place in August 2018, at the ABC centre, Sydney. The concert was compered by Michael Morton-Evans (OAM). Margaret Brandman was piano associate for all the vocal and choral works presented. The cycle was performed by soloists Désirée Regina and John Antoniou together with Coro Austral directed by Margot McLaughlin. Other works from Margaret's catalogue were performed by Maria Lindsay (violin), Irma Enriquez (Piano) and Elizabeth Hylton (Mezzo Soprano).

In April 2019, Margaret travelled to Los Angeles, USA, where she received the award for 'Best Foreign Composition' for her Firestorm Symphony (III) 'All the Trees are Growing' from the Artemis Women in Action Film Festival - Women Powered Music. The organisers wrote: Congratulations, we know and appreciate how incredibly difficult it is to create music and how much of your energy and commitment went into it.'

Margaret Brandman — current to May 2019