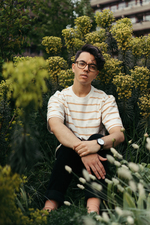 Connor D'Netto (he/him, b. 1994) is a composer of contemporary classical music, described as "the model contemporary Australian composer" by ABC Classic FM.

Balancing driving rhythmic elements, heartfelt lyrical expression drawn from his experience as a classically trained singer, a lushly textural approach to orchestration, and the delicate incorporation of electronic music elements, Connor's work is a constant attempt to bring together sprawling artistic interests, and in doing so, create connections across audiences and communities. Connor's music has been commissioned across Australia and abroad, including by ensembles such the Sydney Symphony Orchestra, the Australian String Quartet, New York based groups including Bang On A Can and Chromic Duo, and performers such as Katie Noonan, Karin Schaupp and Claire Edwardes.

In 2021 Connor was the recipient of the APRA AMCOS Professional Development Award in the Classical/Experimental category. Early in the year The Australian listed Connor as one of their "21 Hottest Creative Artists of 2021". In 2019, Connor was the Composer-In-Residence of the 2019 Australian Festival of Chamber Music, the youngest in the Festival's history. Connor has also held residencies and fellowships with the prolific New York new-music collective Bang On A Can in 2017, with his music featured at their annual Summer Music Festival at MASS MoCA, and with the Melbourne Symphony Orchestra in 2016.

Connor is the Associate Director of Dots+Loops, Australia's post-genre music and arts series, inclusively exploring the spaces in between a traditional classical concert, an underground club gig, and an experimental art show. Dots+Loops creates spaces that transcend the barriers that divide genres, artforms, and communities. Through the arts Dots+Loops aim to build social networks and address social and artistic inequity. Connor was the artistic director, producer, and co-founder of the Brisbane-based contemporary classical concert series "Argo", for which he was shortlisted as a finalist in the "Excellence by an Individual" category of the 2018 APRA AMCOS Art Music Awards.

As a performer, Connor explores the intersections of experimental electronica, ambient and electroacoustic music, combining hardware synthesisers, live instruments, guitar pedals and DIY creations. Often collaborating with other artists, he creates visceral immersive experiences, and raw, tender and emotional sounds straddling across musical worlds. Past collaborations include the duo project "We Are Breathing" alongside American cellist Ben Baker, who in 2018 undertook an tour in Australia with four shows along the east coast, including a performance in the line up of City Recital Hall's all day new-music festival Extended Play.

Connor is a trained classical singer, performing throughout Australia. He is a talented photographer, videographer and visual-artist, creating artworks for gallery exhibits and installations, and collaborating with artists internationally.

Connor completed his Masters of Music at the Royal College of Music in London. He is a Tait Trust Scholar at the Royal College of Music, and his studies were further supported by the Australian Music Foundation Award, the Brisbane City Council Lord Mayor's Young and Emerging Artists Fellowship, the Tait Performing Arts Association, a Churchie Foundation Scholarship, The Julian Baring Award and by the Big Give Campaign at RCM. Connor holds a Bachelor of Music (Honours, First-Class) from the University of Queensland.