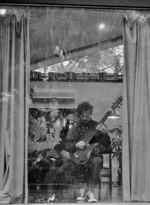 Joseph Franklin is a composer and bassist from regional Victoria, currently based in Narrm/Melbourne. His work draws on post-human and ecologically informed understandings of historical and contemporary creative practice, and spans improvised, notated, experimental and sound art.

Along with leading his own projects, Franklin is a member of Sydney-based new music ensemble The Music Box Project, co-founder of experimental performance group The Opera Company, and has ongoing collaborations with saxophonist Sam Gill and drummer/composer Satoshi Takeishi.

Franklin has composed for a range of ensembles including the Australian Youth Orchestra, Flinders Quartet, Ensemble Nouveau, Geist Quartet and The Music Box Project. He has also performed at concerts, festivals and art spaces across the USA, Germany, Switzerland, Belgium, France, Turkey and Australia.

As a recipient of the 2020 Marten Bequest Scholarship, he is developing several projects including a piano concerto, a method for solo contrabass guitar, an international collaboration in Tunisia, and the design and build of a new hybrid bass instrument.

In 2019 Franklin received a professional development grant from the Australia Council for the Arts to study with Professor Mark Applebaum at Stanford University, where he developed the chamber opera Jouska-A Psychodrama in Three Acts. This was performed by The Music Box Project at the Bendigo International Festival of Exploratory Music in 2019, at a concert titled Shallow Listening-which received the award for excellence in experimental music at the 2020 Art Music Awards. The concert was performed again in May 2021 at two sold-out concerts at Australia Hall, Sydney, where "Jouska was the standout work for its integration of music and theatrical aspects and the variation of compositional techniques" (Classik On).

Also in 2019, as part of the professional development grant, he recorded his second studio album Amen in New York City with pianist Marc Hannaford and drummer Satoshi Takeishi. The album was released via Earshift Music and was performed in the USA and Australia. Amen was described as "the avant-garde of today" (The Weekend Australian) and the Melbourne album launch was a finalist for performance of the year at the 2020 Art Music Awards.

Notable residencies and intensives include Darmstadt Ferienkurse (2021); All That We Are residency (2020) in Tasmania; the Bundanon Trust residency (2019); the Australian Art Orchestra Creative Music Intensive (2018); IRCAM Manifeste! (2017) in Paris; Time of Music Festival (2017) in Finland; and the Australian Youth Orchestra Summer Music Program (2017).

Franklin is currently a masters candidate in composition at the Melbourne Conservatorium of Music, University of Melbourne, under the supervision of Elliott Gyger.