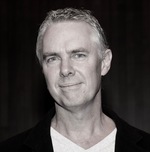 Mark Grandison (b. 1965) studied composition with Richard Meale in Adelaide before moving to Sydney in 1994 to become Director of Music at Kambala. Music education became a passion equal to his compositional pursuits, as he continued to write in equal measure works for youth and professional groups. Commissions have reflected this diversity, such as his Sinfonietta for Sydney Youth Orchestra and his Violin Concerto for Queensland Symphony Orchestra.

Grandison's compositions will often limit the initial compositional resources, such as employing a motif of a few pitches as a movement's entire basis. A childhood and youth absorbed in popular and jazz music will often filter its way into his rhythmic language. His music aspires to create an experience that integrates a core of developmental rigour with a surface that is sensual and dramatic.