Believing in the power of melody, chromatic harmony, lyricism and polyrhythms are at the heart of Isaacs's craft. 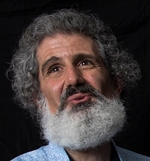 Hailed by the Los Angeles Times as "a splendid musical mind", Mark Isaacs (b. 1958) has achieved widespread recognition as a pianist and composer working in both classical music and jazz.

He has given recitals as a classical pianist, conducted orchestras and as a classical concert hall composer has composed more than 100 major works, many commissioned by some of Australia's most prestigious ensembles, orchestras and soloists and ranging across orchestral, chamber, choral, solo pieces as well as scores for film, television and the theatre.

His compositions have received numerous awards and accolades, including an Australia Council Fellowship, the inaugural Miriam Hyde Composer-Pianist Award, the 2007 Albert H. Maggs Composition Award, and the 2012 Jean Bogan Prize for Piano Composition. Isaacs has also been a prize-winner in the Tokyo International Competition for Chamber Music Composition, and was a finalist in the 2013 Paul Lowin Orchestral Prize.

As a jazz pianist he has toured extensively in Europe, Russia, Asia, the USA, Australasia and the Pacific performing at major festivals including the Tokyo Jazz Festival and Pori Jazz, Finland. He has collaborated with some of the most distinguished figures in international jazz including Roy Haynes, Dave Holland, Kenny Wheeler, Adam Nussbaum, Vinnie Colaiuta, Bob Sheppard and Jay Anderson and he has released numerous internationally-acclaimed albums on labels such as Naxos, ABC, Soundbrush, Vorticity and his own label Gracemusic.

Isaacs has twice been nominated for the ARIA Award (Australian "Grammy") and his composition Walk a Golden Mile received the award for "Instrumental Work of the Year" at the APRA/Australian Classical Music Awards. In 2010 & 2011 he was nominated for several Bell Jazz Awards and for Best Independent Jazz Album at the Jägermeister Independent Music Awards.

Mark Isaacs' first symphony, commissioned by former media executive Kim Williams AM, was premiered by the Queensland Symphony Orchestra in 2013, and the TV program of the premiere - which Mark co-produced - has been screened on Foxtel in Australia and Sky TV in New Zealand.

Isaacs premiered his solo piano cycle Children's Songs at the 2012 Adelaide Festival and recorded it for international release on the New York label Soundbrush Records. Children's Songs was hailed by classical music luminary Vladimir Ashkenazy as a "wonderful cycle [that] is highly inventive and inspiring".

His Chamber Symphony - conducted by the composer - was premiered in July 2015 at the City Recital Hall, Sydney, and in September 2015 Mark Isaacs conducted the Queensland Conservatorium Symphony Orchestra in a program of his own orchestral works.

In 2017 Mark Isaacs completed the composition of his Symphony No. 2.

Mark Isaacs holds a Master of Music degree in classical composition and piano performance from the Eastman School of Music, New York. He is also a trained and accredited telephone crisis supporter at Lifeline Australia, the nationwide suicide prevention service.