My compositional approach is firmly rooted in the technical resources of the Western classical canon, while embracing sounds and ideas from an array of popular, experimental, Australian and non-Western traditions. This combination of rigour and pluralism gives rise to music at once vectored and kaleidoscopic. 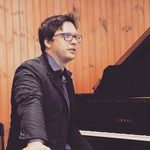 Nicholas Vines (b.1976, Sydney) is an Australian composer particularly active at home and in the US. Described as 'exquisite' (Gramophone), 'riveting' (The New York Times), 'arresting' (The Boston Globe), 'compellingly original' (Boston Phoenix), 'full, extravagant and wild' (Sydney Morning Herald), and 'edgy, bright and entertaining as hell' (NewMusicBox), his music has been performed in Australia, North America, the UK, Europe, China and Japan. Interpreters of his work range from high school students to specialist new music ensembles.

Vines's compositions have received prizes from the US, UK and Poland, as well as Australian honours such as APRA AMCOS & AMC Art Music Awards. His compositions are published by Faber Music, Wirripang and the Australian Music Centre.

At the University of Sydney, Vines studied with the likes of Peter Sculthorpe, receiving a BMus, MMus and the university medal. He completed the AM/PhD programme in composition at Harvard University in 2007, having been awarded the Sir Robert Gordon Menzies Scholarship, as well as Harvard fellowships. While there, he worked with Julian Anderson, Lee Hyla, Judith Weir, Sir Harrison Birtwistle, Brian Ferneyhough and Helmut Lachenmann. More recently, he completed a Graduate Diploma in Education at the University of New England.

Formerly a lecturer in music at Harvard University and the Massachusetts Institute of Technology, Vines has also worked at Wellesley College, the University of Sydney and the Australian International Conservatorium. He is currently Senior Master of Academic Extension (Music) at Sydney Grammar School and a composition tutor at the University of New South Wales.

Additionally, he has run the New Works Program for New England Conservatory's Summer Institute for Contemporary Performance Practice since 2007. Vines has also worked in legal contexts, most notably as an expert witness in musicology for Boomerang/Harry Vanda and the Estate of George Young.

In recent years, Vines has been actively involved in mentorship of young composers through the Artology Fanfare Project (2014-20) - which won the 2016 APRA AMCOS & AMC Art Music Award for Excellence in Music Education - and the 2015, 2017 & 2019 Santa Sabina College Australian Music Seminars.