"I aspire to truth ​in music, of the cosmic spirit, wrapped in love, fired with energy ​and conviction. My compositional process is based on improvisation and connected to my personal spirituality. Universe and Universality." 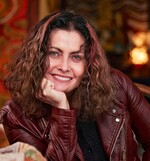 Keyna Wilkins is a pioneering Australian/British composer-musician. She was one of three finalists for the Australian Art Music Awards for Individual Excellence in 2021 and 2018 (APRA/AMCOS). Her compositions are performed internationally and published by Wirripang. (See www.keynawilkins.com for links to buy sheet music) Her music is described by The Sydney Morning Herald as "arresting, genre-blurring…disquieting music with massive breadth and high drama". Stylistically broad, her works embark on a journey of impressionistic dream-like sequences alongside landscape depictions and existential spiritual quests, characterised by a fascination with astronomy, First Nations culture, jazz, dance forms and intuitive improvisation. Celestial Emu didgeridoo concerto is her largest work to date which she wrote in collaboration with leading Indigenous Gamilaroi yidaki (didgeridoo) player Gumaroy Newman for The Metropolitan Orchestra in 2020. Sydney Arts Guide writes "To hear the unmistakable reference to First Nations song so well pitted against TMO's Western Art Music instruments creating such evocative cells of expression with humility and sincerity in new music devoid of borrowings from tribal repertoire was a touching, inspiring and admirable step forward. It received an extended and hearty standing ovation and will add tremendously to our orchestral music canon." As well being represented by AMC, Wilkins also has five tunes in the Australian Jazz Realbook and writes music for films/theatre including short film "Remote Access" which won Best Short Film at the Imagine This International Film Festival in New York 2019 and her self-released 8 albums of original music have been featured on ABC, Triple J and many more around Australia and UK.

As an innovative soloist she has been heralded by UK's Jazz Journal as a "powerhouse player", and "particularly fine playing, nuanced and thoughtful" by Limelight Magazine. She performs her compositions/improvisations/re-interpretations often with projections and loop pedal at venues all over Australia including Phoenix Central Park and MONA, Sydney International Jazz Festival 2020 and Melbourne Digital Recital Hall. She has released 4 solo albums on all streaming platforms; So What Bach, Keys Across The Sky, Air In Motion and Jazz Revere. In 2019 she founded the indigenous-jazz fusion duo Yulugi in collaboration with leading First Nations didgeridu player Gumaroy Newman. Yulugi means to play, dance or have fun in Gamilaroi, the Northern NSW First Nations language. Sydney Morning Herald describes the duo as "instantly engaging ....with Gumaroy Newman's arresting voice and yidaki leading us deep into his ancestral culture, in dialogue with Keyna Wilkins' piano and luminous flutes" Fine Music FM describes their debut album "Chasing Stars To The Mother Tree" (2020) as "This is virtuoso playing, worthy of any Australian collection". Performance highlights include Woodford Folk Festival and SIMA Summer Festival. Also in 2015 she founded the breakout space music sensation Ephemera Ensemble, which has been described by Jazz and Beyond as "Full of sonic textures and infinite possibility". Ephemera was featured at the Sydney International Women's Jazz Festival 2017 and at Extended Play Festival at City Recital Hall 2018. Ephemera have released two albums; Orbits and Riffs (2017) and Blackholes and Modulations (2021).