by Lachlan Skipworth and Annie Hsieh

Over the past four months, six young Australian composers - Annie Hui-Hsin Hsieh, Lachlan Skipworth, Tristan Coelho, Melody Eötvös, Christopher Larkin and Timothy Tate - have been busy with the Adelaide Symphony Orchestra's 2012 composer residency program. The group got together for the first sessions in June, including workshops with James Ledger. In September, five of them were involved in a masterclass with Tan Dun . A concert with resident composers' music, played by members of the ASO, took place on 23 September during the OzAsia Festival.

Annie Hsieh and Lachlan Skipworth wrote down some of their thoughts during the Tan Dun masterclass.

Quotes in italics are by Tan Dun, as written down by Annie.

Lachlan: I can't wait to meet Tan Dun. I remember seeing him conduct his Water Passion in the Perth Festival a number of years ago, and was really touched by his music, especially his use of percussion and his writing for the solo strings.

Lachlan: When Tan got up to speak, he addressed the whole audience, and proceeded to speak to us and somehow draw us in to his exciting future visions for the contemporary music scene, especially in Australia. We knew we were in for a lively two hours! 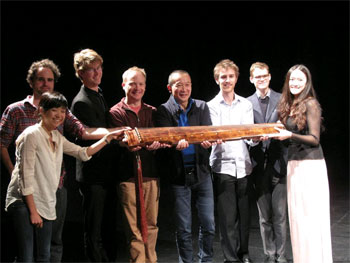 Annie: My piece actually worked and the intricate details blended in nicely. The ensemble did a terrific job! Thanks a bunch! The comments centred around ideas of many compositional 'systems' in music such as chromatic versus organic, metered versus free/improvised material, and comparisons between composing/music-making and food and cookery.

Tan also seemed impressed by the diversity in Australian music, and mentioned that our geographical distance from the major music centres (particularly Europe) is reflected in the music we produce: drawing influences and inspirations from Eurocentric styles yet developing a strong sense for one's own language. His comments (particularly to my piece) also refer to creating complexity in simplicity (i.e. building complex textures from simple material), and how effectiveness could be achieved. He finished my session expressing the need for collaborations between composers and ethnic/ancient instruments in finding ways of creating new music for old instruments.

'I like tar' says Tan Dun, suggesting exploring various sonic qualities available on the instrument to create contrasting musical interest. 'You've got to find your own rosemary, place it on top of a beautifully-cooked dish just before serving it up, to create a strong psychological impression.'

Lachlan: Tan spoke about the importance of melody in music, and how he had placed wide leaps in his melodies for the Martial Arts Trilogy, for example a rising perfect fifth followed by a falling minor 6th. He believed that the use of these leaps generated an instinctive response to the music that lingered longer than the piece itself, giving the audience something to take away with them.

Annie: I enjoyed listening to the guqin really shine through in this piece.

'Australian music could be very interesting in the future'. Talk about Debussy and his influences from gamelan music, in relation to his previous observations concerning Australia's geographical location and the music that is being made here. 'Very interesting.'

'Music is like food…' This was in reference to being open-minded about different influences, as well as respecting traditions in the contemporary world and our relation to the tradition as musicians.

'You could be anything.' 'The pieces are deeply touching'. Suggestions for writing rock'n'roll for guqin, why not? Anything is possible when you amp it up properly!

Lachlan: I loved how, almost as an afterthought, Tan suggested I take the subtle rhythmic pulsing in my piece to the extreme, and draw more on rock music. In a way I think he second-guessed me - I always have an urge to break loose buried within me, but it only rarely comes out in my music. But as I had composed quite a static piece in order for the sound of the guqin harmonics to come through, this urge never really saw the light of day this time around!

Tristan Coelho: As the Dust Rises.

Annie: It was very interesting to look at (and hear) this piece when I realised the many gestures and approaches were very similar to my own ideas - although the material might be different, the aspects of the instrumentation and the way to go about writing for the ensemble was strangely similar. A great piece.

Tan's suggestions had to do with using the ensemble as well as using smaller configurations of it, and solos.

Lachlan: Tan was, once again, very impressed with Tristan's piece and his handling of the ensemble. But, as a good teacher does, he sought to challenge Tristan by inviting him to try more combinations of smaller groups within the ensemble.

Annie: And there, a wild bassoon solo, just as Tan mentioned previously.

Difficulties versus simplicity in writing music, what do you eventually want to hear? Again, addressing the notion of minimal material composition versus maximal, and whether one achieves a better result than the other, or the need to employ one over another.

Is tonal music a taboo in contemporary music? Or is it an outdated notion lingering on for the 21st century?

Fusing, crossing-over, being open-minded in creating music in this current time.

'Who wrote music history? Composers. But who makes the composer? Himself, and the audience.' What a quote, but I'd also like to add performers into the equation...

'Anyone who is a good composer must challenge, and be challenged by, the audience.'

Lachlan: Tan spoke of Tim's striking work within the context of the music that we can write to be relevant to our society today. He launched passionately into a final plea to us all to find the music that speaks strongly to a large audience and cuts through the boundaries of both genre and culture. He really showed us his belief in the future of music, but urged that we maintain high standards and be at all times savvy. Finally, he asked Zhao Xiaoxia to perform a short guqin solo taken from a traditional piece, and we beheld a true show of virtuosity, both fiery and peaceful, and at all times engaging. I think through this performance we began to see the true value of Tan's ideals for art music for the 21st century. We'll do our best.

Annie: Tan was very generous with his comments, insights and above all, his enthusiastic (and perhaps a little flattering) encouragements. A precious experience for us and we were all too fortunate and privileged to be invited by the Adelaide Symphony Orchestra and OzAsia Festival on this rare occasion. We definitely all walked away a little more confident and inspired to propel forward for what brings on in the future, and eager to explore further in what someone of Tan's stature sees in the music we are making here in Australia. Speaking of which, Sunday is approaching rather rapidly, and I can't wait to hear the final performance of our pieces. I think it is going to be a blast!

Lachlan: During the workshop, Tan often spoke of composing in relation to cooking which, having a certain fondness of pizza-making myself, I found quite interesting. I walked away thinking next time I should invite Tan to my house and cook for him myself, and maybe he'd have even more great insights about composing. But then again, I think I'd just like to try something that comes out of his kitchen - I'm sure it would be delicious!